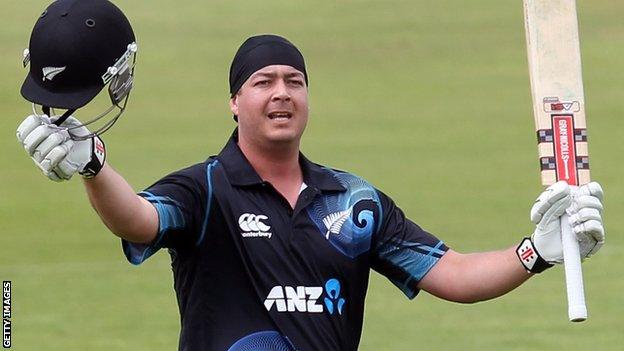 The 29-year-old New Zealand international will join the club in May and feature in all formats this season.

"I'm excited about bringing him to the club, he'll put a few bums on seats," Grayson told BBC Essex.

"He hits the ball hard and likes to entertain. I think he'll fit in with us. But if he gets going at Chelmsford there may be some fireworks."

Ryder arrives with a chequered history in the game, having most recently been dropped from the Kiwi Test side and omitted from the World T20 squad after a drinking session.

He also overcame a period in hospital last year, when an attack outside a Christchurch bar left him in a medically-induced coma.

The left-handed batsman, who also bowls right-arm medium pacers, could be available to face Leicestershire on 5 May, by which point Alastair Cook and Ravi Bopara are expected to have linked up with England for the one-day series against Sri Lanka.

"He's box office, we know that. He's got a very good record, he's available and will hopefully be in the country in a couple of weeks, maybe for the Leicestershire game," said Grayson.

"Ravi and Alastair might be away for that game.

"In one-day cricket he'll be looking to bat a the top of the order. But in the Championship he may fit the middle order. "