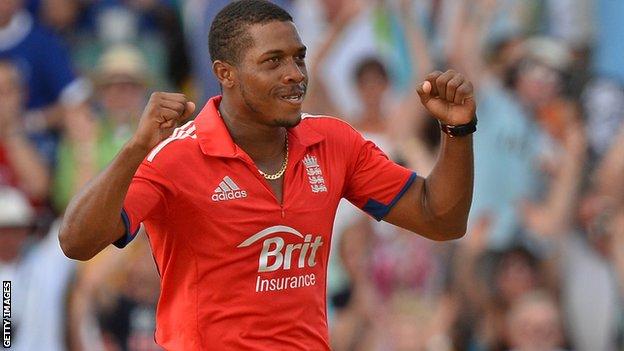 Sussex fast bowler Chris Jordan has signed a two-year extension to his contract, keeping him at the club until the end of the 2016 campaign.

The 25-year-old moved to Hove from Surrey at the end of 2012 and took 59 Championship wickets last season.

He made his one-day and Twenty20 debuts for England over the winter and was handed an incremental contract by the England & Wales Cricket Board in March.

"Hopefully I can continue putting in solid performances," he said.

Jordan took figures of 6-48 on his debut for Sussex against Yorkshire last April, putting him sixth on the all-time list of the best bowling figures on debut for the county in either innings.

CJ has had an incredible year and there is no reason why he can't continue to take his career forwards. He has been humble, honest and hardworking

After playing for the England Lions in mid-season the former Dulwich College pupil went on to win full international honours during the one-day series against Australia over the winter.

He went on to tour the West Indies with England and played in the World T20 in Bangladesh.

"It's great to have signed an extension to my contract at Hove," Jordan added.

"I want to be able to help Sussex have the best chance of winning trophies and hopefully the new contract will give me the platform to push for further international honours."

Jordan has targeted winning a place in the England Test side and Sussex cricket manager Mark Robinson is looking forward to seeing his game develop in the coming years.

"CJ has had an incredible year and there is no reason why he can't continue to take his career forwards," Robinson said.

"He hasn't changed since the moment he walked in. He has been humble, honest, hardworking and, as a cricketer, exciting to be around."