A cricket team were humiliated after only scoring three runs between them.

Ten Wirral Cricket Club batsmen were out for ducks, only the number 11 troubled the scorers, with the other runs coming from two leg byes. 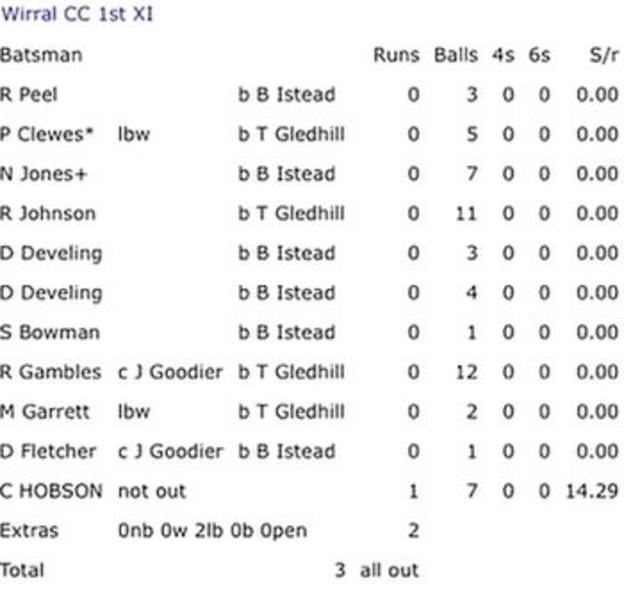 It left Wirral some way short of the 109 they needed to beat Haslington in a Cheshire League Division Three fixture.

While an embarrassing loss, it was not a world record lowest score - Somerset club Langport were dismissed for zero against Glastonbury in a 1913 match.

At one point Wirral were 0-8 after six overs before the pair of extras and Connor Hobson - who finished one not out - dragged the innings out until the 10th over.

Unsurprisingly, Haslington needed only two bowlers. Ben Istead captured six wickets in his five overs for the concession of the solitary run, while new ball partner Tom Gledhill returned a rather economical 4-0 from 4.2 overs.

Discussing Wirral's collapse, Matt Garrett, who came in at number nine with the score at 0-7, told BBC Radio 5 live Weekend Breakfast: "It all happened in a bit of a blur really.

"I think I headed into the changing rooms to get my pads on when we were three down and got out to the middle just in time to take my guard when the seventh wicket fell.

"The reaction in the back of your mind is, 'I think we can still do this' but, two balls later when you're following all your team-mates back to the clubhouse, you think perhaps it's not your day."