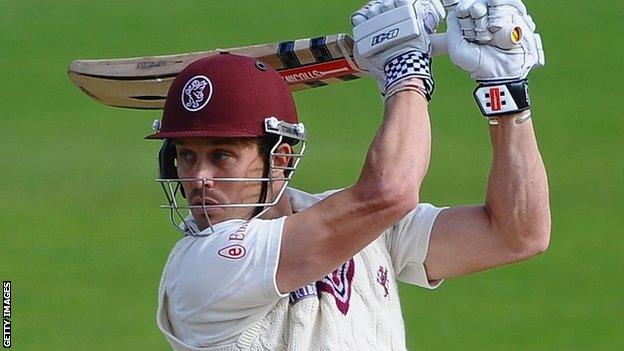 Chris Jones was a victim to Chris Jordan's first ball after rain saw the first two sessions washed out.

England hopeful Nick Compton (41) shared a stand of 78 with skipper Marcus Trescothick (39no) before being caught behind with 15 balls to go.

Nightwatchman Jamie Overton then fell to returning paceman Jordan (2-30), as the visitors closed on 83-3.

After their early breakthrough, when Jones was taken by wicket-keeper Ben Brown off Jordan, the early Division One leaders found the going much tougher.

Compton showed exemplary technique in helping to see off the new ball along with former Test opener Trescothick.

He looked set to follow up his unbeaten century in the draw at Durham with another sizeable score, until snared by Steve Magoffin.

"With rain and a wet outfield delaying play until 4.30, only 32 overs were possible. But Ed Joyce would have delighted to have won the toss, and his decision to ask Somerset to bat was vindicated in the second over with Chris Jones caught behind first ball and not a run on the board.

"Thereafter Trescothick and Compton steadied the Somerset ship, showing excellent technique in testing conditions under a stern examination from the Sussex seamers.

"With nightwatchman Overton then brilliantly caught in the slips by Mike Yardy, Sussex will feel they have had the better of a truncated opening day."