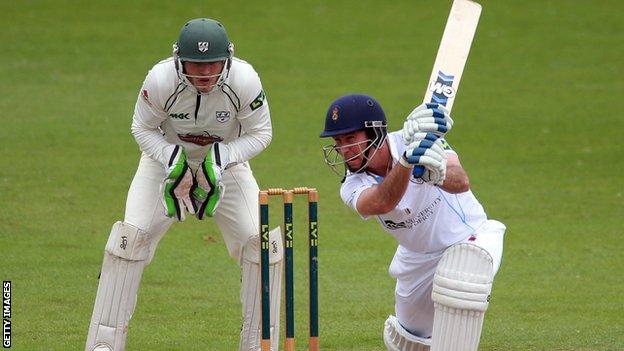 Captain Wayne Madsen scored a century to save Derbyshire from collapse on the second day at Worcestershire.

After ending a weather-shortened opening day on 3-2, Madsen and Shiv Chanderpaul steadied Derbyshire before the latter fell to Gareth Andrew.

Spinner Saeed Ajmal (4-60) then ripped through the visitors' middle order, including two wickets in two balls.

Madsen ran out of partners on 111 as Derbyshire were 219 all out, before the home side replied with 31-0 at stumps.

Ajmal, whose drawn-out return to New Road was only cleared on Friday, had too much guile for most of the Derbyshire line-up, and removed Wes Durston and Dan Hodgson with successive balls.

Tail-enders Tim Groenewald (24) and Mark Footitt (17) dug in to provide some support for Madsen, but he was eventually left stranded after hitting 14 fours in his five-hour innings.

"It was a good day's cricket, highlighted by a fine century by Wayne Madsen, who, aided by the tail, took Derbyshire to what might be a useful total, although there were no great alarms for the Worcestershire openers before the close.

"Derbyshire were 78-2 just before lunch but Gareth Andrew bowled a good spell either side of the break, and Saeed Ajmal's two in two balls had Derbyshire in trouble. But Madsen's chanceless hundred deserved better support.

"Ajmal again looked a class act, and youngster Charles Morris came on after tea with a really aggressive spell, looking as if he could be the find of the season."