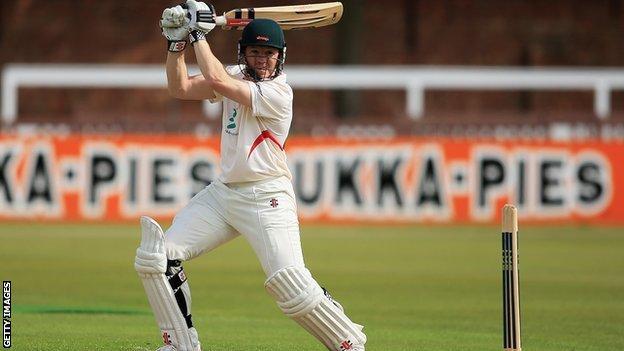 Niall O'Brien's 133 led Leicestershire to 500 all out before Glamorgan fought back to reach day two stumps on 126-0.

Resuming at 221-4, O'Brien and Josh Cobb (63) took their partnership into three figures before the latter departed, leaving O'Brien to reach an impressive hundred featuring 11 fours.

Glamorgan's Jacques Rudolph and Gareth Rees closed on 63 and 53 respectively.

The pair's contribution will be vital on day three as the Welsh county remain 380 runs adrift after Leicestershire's late flourish with the bat.

O'Brien was imperious as he marched to his 13th first-class century, but when the Ireland wicketkeeper was caught in the deep he could not have predicted his side's tailenders would perform as they did.

Taylor bludgeoned his way to a half century, and soon after he had been bowled, Anthony Ireland joined him in the pavilion.

Naik, who played foil until Taylor's dismissal, was joined by Charlie Shreck (31) and the pair added 51 from seven overs before a mix-up saw the latter run out.

In reply, Rudolph was at his best, exemplified by a sweet off-drive to bring up his half-century - one of 12 boundaries.

Rees too was untroubled as he helped the visitors end the day strongly, but still facing a battle to avoid following on.