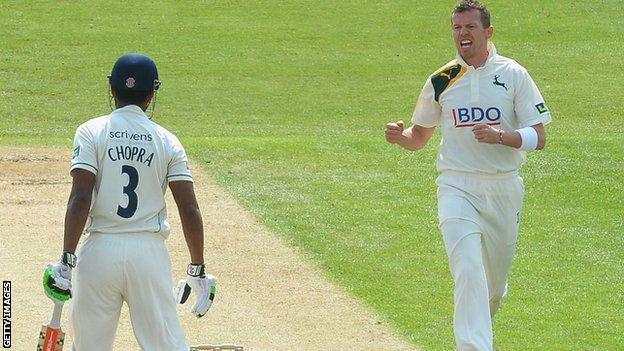 Wickets continued to tumble on the second day as Notts were set a target of 300 by Warwickshire at Trent Bridge.

Chris Woakes took three wickets in one over as the home side were bowled out for 116, despite 54 by Samit Patel.

Nottinghamshire have won 10, lost two and drawn three of the last 15 Championship matches played at Trent Bridge in April.

After 16 wickets fell on the opening day, the home side made a solid start after resuming their first innings on 43-6 before another flurry of activity.

Patel and Chris Read (27) extended their partnership to 72 before the former top-edged a pull off Oliver Hannon-Dalby and Ian Bell took a good catch running from slip to point.

The end of the innings was spectacular as Woakes cleaned up Read, Andy Carter and Gurney in the space of five deliveries - Gurney departing second ball after being dropped by Will Porterfield off the first - but Notts hit back immediately as Siddle had Varun Chopra caught behind off the second ball of Warwickshire's second innings.

Tim Ambrose's 29 was the top score for the visitors as the Notts seamers made hay, with first-innings centurion Bell only managing five this time before edging a ball from Gurney to wicketkeeper Read.

The innings lasted just 39.3 overs and despite losing Steve Mullaney to a third-slip catch by Bell off to Keith Barker for 15, it looked like Jaques and Lumb had tilted the match in the home side's favour with the best batting seen since Bell's first-innings 122.

However, Lumb was adjudged lbw to off-spinner Jeetan Patel and seamer Chris Wright found the edge of Jaques' bat with an angled delivery in the following over to leave the game intriguingly poised at stumps.

"Despite having been second best for most of the contest, Nottinghamshire chugged into life with a much-improved performance and still have a chance to snatch the victory.

"Australia bowler Peter Siddle showed what the hype had been about with an exceptional spell from the pavilion end and his fellow countryman, Phil Jaques, helped lay the platform for the run chase.

"Now it's down to the much-vaunted middle order to show they do have the necessary quality to get over the finishing line."

"The mood in the Warwickshire team hotel will have been a good deal lighter after two wickets fell just before the close to undermine Nottinghamshire's resistance.

"As Phil Jaques and Michael Lumb batted with assurance for Notts, Warwickshire must have feared recent history would repeat itself. They failed to defend a target of 330 against Sussex in the opening game of the season, albeit on a much flatter pitch, and they looked in danger of succumbing to a run chase of 300 here.

"But there is enough uncertainty in the Trent Bridge pitch for Warwickshire to remain favourites to take the seven wickets they need for a first victory of the season.

"They'll be greatly encouraged by the form of bowler Chris Wright. The lifting delivery that saw Jaques glove to the wicket-keeper was unplayable and Wright appears to be back to his best after returning from last season's injury problems."