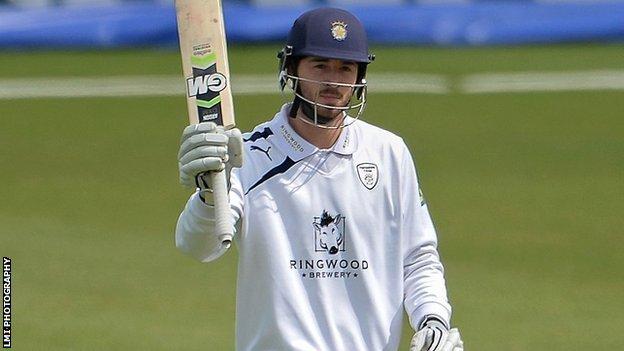 James Vince reached his second Championship century of the season on a rain-affected second day of Hampshire's Division Two game with Surrey.

The hosts moved on from 153-2 to 289-3 in the morning session, but no play was possible after lunch because of heavy rain and a waterlogged outfield.

Jimmy Adams (65) was the only man dismissed during play, caught by Graeme Smith off Zafar Ansari.

The 23-year-old reached his hundred off just 102 balls and struck 17 boundaries in his innings before the weather intervened.

Vince has scored 400 runs in his four Championship appearances so far this season, with his other century coming in the eight-wicket win over Gloucestershire.

"Already the game has lost over 120 overs, which has suited Surrey more than Hampshire.

"Despite being dropped twice, on seven and 44, James Vince has looked awesome.

"Hampshire's best prospect of a result now is to hope that they get a sizeable first innings total to put pressure on Surrey over the last two days - if the weather will allow."

"James Vince certainly enjoyed the two hours of play that were possible on the second day. He moved to a lovely century scoring 93 runs in the morning session and playing some handsome shots.

"Surrey's one success was the wicket of Jimmy Adams for 65 caught by Graeme Smith off the left-arm spin of Zafar Ansari, butt Vince will start the third morning unbeaten on 118 and with full licence to play his shots."