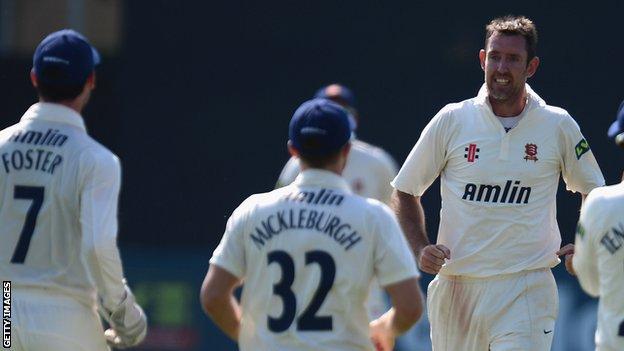 Seam bowler David Masters took 4-39 as Essex made the most of a weather-shortened second-day's play against Gloucestershire at Bristol.

Following Sunday's washout, Masters dismissed Michael Klinger and Will Tavare in the third over of play.

And the veteran later removed Will Gidman (21) and Cameron Herring either side of a weather hold-up.

Graham Napier picked up the other two wickets but Chris Dent was unbeaten on 47 as Gloucestershire closed on 104-6.

Dent, who made a half century against Glamorgan, struck eight boundaries, but was unable to complete another before bad light sent the players from the field, to be followed by a conclusive downpour.

"Although it was Essex's day, Gloucestershire will not be too unhappy. If they can add another 50 or 60, that could still be a competitive total on a pitch favouring the bowlers.

"Chris Dent batted superbly, watched by England captain Alastair Cook at slip, but with the weather remaining unsettled, this match could just be about accruing first innings bonus points."

"After the washout on day one, rain allowed only 31.1 overs of play as another storm of Biblical proportions put the kibosh on an already saturated scenario shortly after 5.00pm.

"To some extent the Essex bowlers allowed the batsmen too much width, as they did against Surrey at the Oval, but the ever-dependable Masters again excelled with 4-39.

"The severity of the final storm evoked memories of the M4 corridor flooding of 2007 which saw a match between the sides transferred from Cheltenham to Bristol and even then play was only possible on the final day."