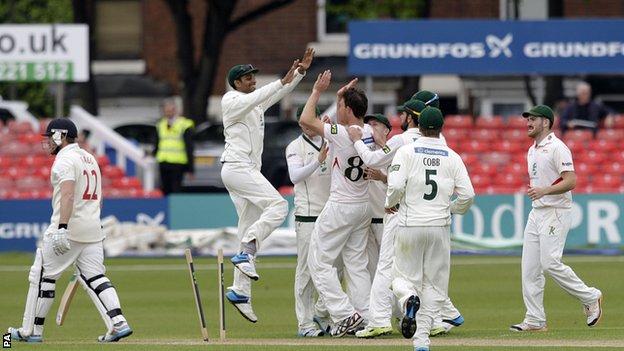 Graham Wagg's quickfire half century saved Glamorgan from having to follow on day three against Leicestershire.

Wagg, however, smashed three sixes and seven fours in his 57 off 54 balls to see them to 359 all out.

Leicestershire then made 77-1, a lead of 218, before bad light ended play, with Greg Smith unbeaten on 45.

The only wicket to fall was Matthew Boyce to spinner Dean Cosker, and the hosts have the opportunity of pressing on during the final morning with a view to a declaration aimed at forcing a positive result.

After Glamorgan lost openers Jacques Rudolph (65) and Gareth Rees (72) in the morning session, the former in the third over of the day from a brilliant run out by Boyce, Shreck and Ireland kept chipping away at the Welsh side.

Stewart Walters (35) survived a scare when the bail failed to fall when the ball hit his stump, only to fall to Ben Raine shortly after and it was left to Wagg to rescue his side.

The 31-year-old struck Jagir Naik for three sixes in the space of 10 balls before bringing up his 49-ball half century with a boundary, but pulled a catch to Rob Taylor at mid-on off Shreck as the innings came to an end.

"A hugely frustrating Glamorgan last-wicket partnership aside, this was another very positive day for Leicestershire.

"The trigger was a brilliant piece of fielding by Matt Boyce to run out Jacques Rudolph, who had looked in complete control on what is still a pretty flat track.

"Thereafter, the seamers really stuck to their task and the Foxes would undoubtedly have enforced the follow-on had Graham Wagg's assault on the bowling of Jigar Naik not made the question academic.

"The word from the middle is that what has hitherto been the most blameless of pitches may be beginning to take a little turn and that could give Naik the opportunity to take his revenge and bowl Leicestershire to what would be their first Championship win since September 2012."