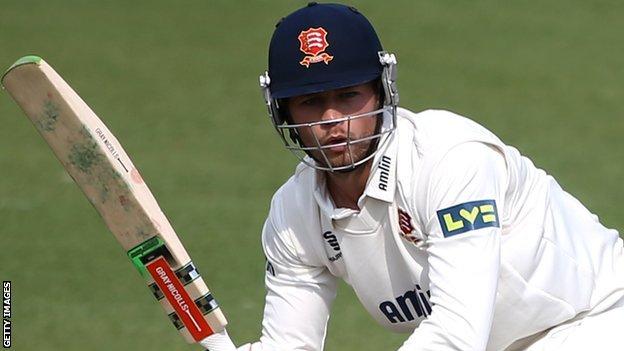 Veteran seamer David Masters continued his destructive form at Bristol, adding two wickets to finish with 6-48, as the hosts were all out for a measly 134.

Bowler David Masters has now claimed 30 five-wicket hauls in his career, but has yet to take 10 wickets in one match

Gloucestershire then reduced their opponents to 71-5, with England captain Alastair Cook bowled for only four by 19-year-old medium-pacer Matt Taylor.

But Foakes and James Foster (91) held firm to put on a 218-run partnership.

It took Gloucestershire 44.2 overs to break the duo, and Foster was within nine runs of a century himself when he edged Saxelby (3-71) behind.

Foakes remained in place on 132, his highest-ever score with the bat.

"Gloucestershire's bowlers were hugely disappointing after having Essex at 71-5.

"They simply bowled too short either side of the wicket to Ben Foakes and James Foster and the home batsmen will have to bat with application to avoid defeat.

"A plus for Gloucestershire was young left-armer Matt Taylor, who dismissed England captain Alastair Cook with what was certainly not the best ball he's ever bowled: a rank-long hop outside the off-stump steered neatly into the hands of point."

"The evergreen David Masters returned yet another six-wicket haul as the home side added only 30 runs to their overnight score. However, this performance proved to be merely an overture to Ben Foakes' glorious symphony in the afternoon and evening sessions.

"Playing with ever increasing confidence and maturity, he began with considerable circumspection but then built to a crescendo as he reached an undefeated career-best score.

"If Essex demonstrate greater enterprise than in last week's match at the Oval, they could record their second victory of the season on the final day."