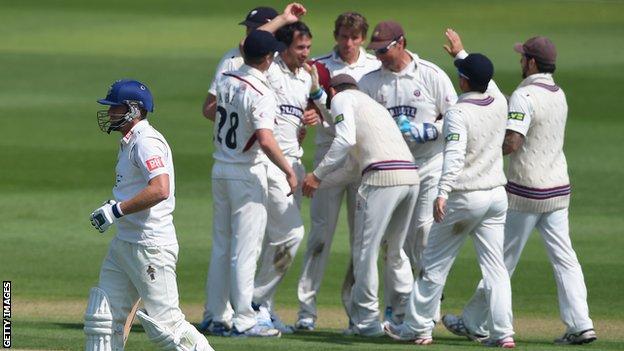 Lewis Gregory put Somerset on course for their first win of the summer by forcing Sussex to follow on at Hove.

The hosts resumed on 25-1 but 21-year-old Gregory soon ripped through their middle order, taking 5-49 as Sussex were all out for 142.

However, Ed Joyce remained at the crease on 76 alongside Chris Jordan.

Luke Wells was Sussex's only saving grace in a poor first innings, finishing on 79 not out.

Kieswetter has been advised by doctors to rest and it is not known when he will return to action.

"Overcast conditions on the third morning were exploited to such effect by the Somerset seamers that the Championship leaders were forced to follow on 230 runs behind.

"And by stumps at Hove the hosts were facing their first defeat of the summer.

"Marcus Trescothick added two catches behind the stumps to his first innings century, as he deputised for an ailing Craig Kieswetter before Alex Barrow, plucked at short notice from the second XI, arrived as a replacement."