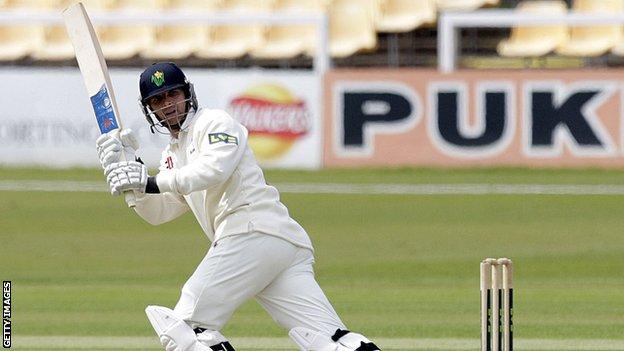 Leicestershire were denied their first Championship win since 2012 as Stewart Walters earned Glamorgan a draw.

The result meant Leicestershire, who also came close to victory at Kent last week, have still not won in the Championship since

They had begun the final day 218 ahead, on 77-1, and set about trying to force a positive result, with Smith hitting 13 fours in his 131-ball knock before he was run out at the non-striker's end when Will Owen got a fingertip off his own bowling.

In response, Jacques Rudolph (63) and Murray Goodwin (50) helped Glamorgan along nicely with a third-wicket stand of 60, and while they were together, the Welsh county may briefly have had aspirations of going on to win the match themselves.

Rudolph, however, became off-spinner Naik's first victim and from 182-3, three wickets for nine runs changed the entire complexion of the game as Goodwin, Jim Allenby and Mark Wallace fell in quick succession to turn the game in the hosts' favour.

Graham Wagg, whose 57 saved Glamorgan from following on in the first innings, then survived a scare when Ned Eckersley dropped a sweep off Naik, but in the next over he hooked to Matt Boyce in the deep off Ireland.

Leicestershire fielders surrounded the bat when Naik was bowling, but Walters and Glover stood firm as Glamorgan hung on for the draw.

"Once they get over the disappointment of not being able to force the win they deserved, Leicestershire will take huge encouragement from this game.

"As at Kent the previous week, the Foxes dominated for long periods, and taking 17 Glamorgan wickets on the flattest of Grace Road tracks was an admirable achievement.

"With Greg Smith coming within three runs of scoring a hundred for the second consecutive game, and most of the other batsmen in the runs, the side are compiling the sort of totals which give bowlers time to take wickets.

"Josh Cobb's declaration was very positive - some thought it over-generous - but it was indicative of a very different and determined attitude in the dressing room this season.

"That elusive first win cannot be far away."