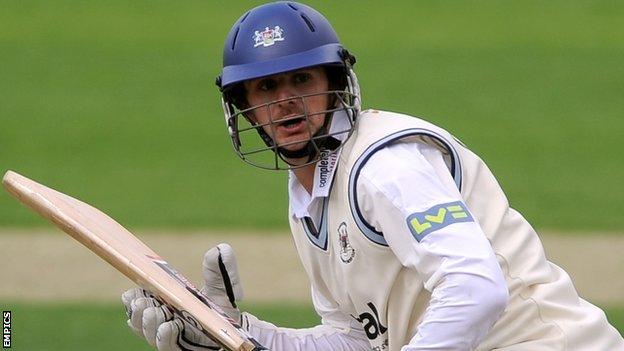 Alex Gidman and Will Tavare both hit unbeaten centuries for Gloucestershire to secure a draw with Essex at Bristol.

Essex declared on their overnight score of 305-8, a first-innings lead of 171.

And Gloucestershire made a shaky start after losing Chris Dent and Michael Klinger to David Masters and Tymal Mills, leaving them 18-2.

Gidman struck a six and 17 fours during his 214-ball innings, while Tavare faced three deliveries more and collected 12 boundaries.

It was a second century in three matches for the 24-year-old, who joined Gloucestershire on a one-year deal in September, after impressing for the second XI.

Essex lost both Graham Napier and David Masters to injury during the afternoon session. Napier has a leg muscle strain - either hamstring or calf - and Masters suffered a hand injury.

"Alex Gidman passed 10,000 first-class runs during his double century stand with Will Tavare.

"The two of them dug Gloucestershire out of a hole. They came together when the score was 18-2 and batted with discipline to eventually put the game out of Essex's reach.

"But Gloucestershire will be looking for more consistency from their bowlers as they aim to kick start their season."

"An enterprising declaration overnight by Essex paved the way for a potentially exciting final day.

"And with Gloucestershire's opening batsmen back in the pavilion before the team had reached 20, the visitors' hopes of victory were high.

"However, as the pitch became increasingly amiable, it was the hosts who held sway for the remainder of the proceedings.

"The bowling became wayward, the heads began to drop as superb centuries by the experienced Gidman and the highly promising Tavare ensured a draw and the shaking of hands at 16:50 BST."