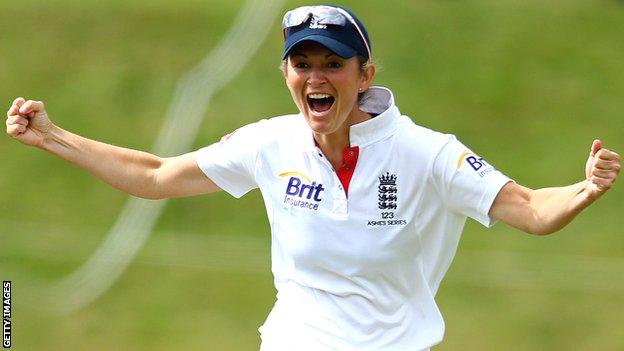 England captain Charlotte Edwards is hopeful the success of the international team will increase crowds at Women's County Championship matches.

Edwards' Kent side begin their season against Yorkshire this weekend.

"I think the game's certainly on the up. The next step for us is to get more interest in county cricket," Edwards she told BBC Radio Kent.

"I hope people will support our County Championship, which would be a sign the game is growing."

She added: "With us being a successful county team it would be great to get some of the Kent members come down to watch us."

Charlotte Edwards: Leading from the front

Earlier this month, England and Kent skipper Edwards became only the second woman to be named as one of Wisden's Five Cricketers of the Year.

In an 18-year international career, Edwards, 34, has won five Ashes series, and in 2009 led England to victory in both the World Cup and the World Twenty20.

On the domestic front, Kent will begin the campaign without Edwards' England team-mate Tash Farrant, with the left-arm bowler nursing a back problem.

But seamer Laura Marsh has recovered from injury and is available for selection.

Edwards explained: "She (Farrant) will be unavailable for the first couple of games.

"It's precautionary really, because of her back, and she's studying for exams at the moment.

"Hopefully she'll be back within the next few weeks for us which will be great.

"She's young and got lots of cricket ahead of her.

"Laura's coming on nicely. She'll be playing as a batter for the first few games.

"It's about making sure her shoulder is absolutely right for what's coming up later in the summer.

"Last year was frustrating for us in terms of injuries. It's great to see some of our experienced players coming back."