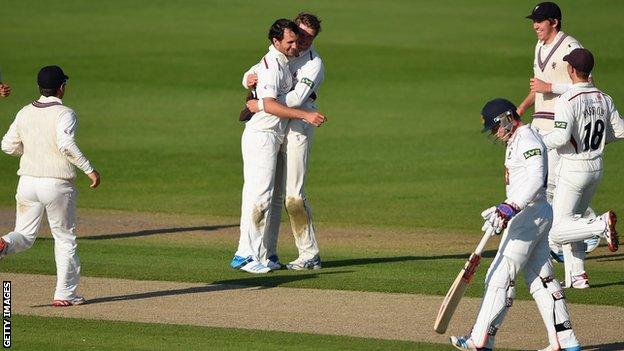 All-rounder Lewis Gregory wants the chance to prove himself with the bat at Somerset after impressing with the ball so far this season.

The 21-year-old has taken 18 wickets in the first three Championship games of the campaign, including a career-best 9-97 against Sussex.

But Gregory told BBC Somerset: "I see myself as a batter who bowls."

His runs are going to be very important to us. It would be great if we could make him into a genuine all-rounder

He continued: "However, with the amount of talent we've got with the bat, I'm likely to get in the team as a bowler.

"The only thing I can do is take some wickets and when I get an opportunity with the bat I need to contribute to the team performance."

Gregory has been at Taunton since 2010 but was primarily used as a one-day player until last season.

And Gregory feels like he has made strides in the past year.

"This season and the end of last season was a big stepping stone for me, to get that consistency within my game and within the team," he added.

"All I can keep doing is keep trying to go out there and perform and hopefully it will stay that way."