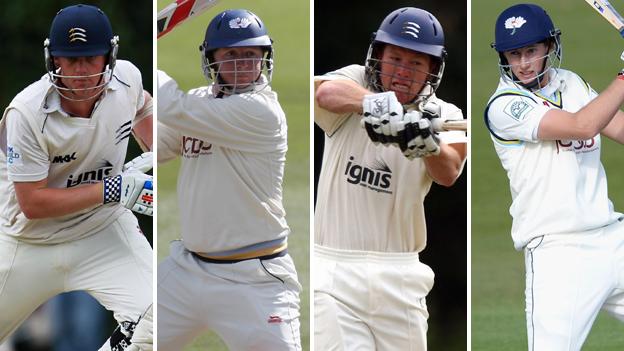 There was a time when the England top six was less likely to be altered than Mount Rushmore.

Andrew Strauss, Alastair Cook, Jonathan Trott, Kevin Pietersen, Ian Bell, Paul Collingwood. Team selection less of a debate, more an exercise in how quickly the names can be scribbled down.

But, the gradual dismantling that began with the retirements of Collingwood and Strauss turned into a full-scale implosion during last winter's woeful Ashes tour.

Only Cook and Bell began this summer knowing that their places were secure - all-rounder Ben Stokes made number six his own in Australia, but fitness and the balance of the side may yet see him shifted around.

And so, with at least three batting slots up for grabs, interest in the early season performances in the County Championship is greater than it has been since the turn of the century. For that reason, attention was drawn to Middlesex's remarkable win over Yorkshire, where four of the contenders looked to press their claims.

Sam Robson, Eoin Morgan, Joe Root and Gary Ballance performed their latest audition on the same Lord's stage that will host the first Test against Sri Lanka on 12 June. So how did they get on?

Born in Australia to an English mother, Robson plundered 1180 Championship runs last season and, on being selected for the England Performance Programme, declared his desire to wear the Three Lions.

An orthodox throwback to the days of 'proper' openers, the 24-year-old right-hander has only ever played eight senior one-day matches and four T20s.

Sam's younger brother Angus plays for Leicestershire, signing a contract in 2013 after impressing in the second XI.

In his wintertime with the Performance Programme and the England Lions, Robson hit five centuries and followed that up with 204 runs across both innings of Middlesex's game against Nottinghamshire.

Against Yorkshire, he fell cheaply on day one in conditions heavily favoured to the seamers, but was not cowed in the face of the huge target of 472, cutting his way to 77, albeit on a flattening pitch.

Even after the news that Michael Carberry has been receiving visits from England batting coach Graham Gooch, Robson looks in line for a Test debut at the top of the order.

Former England international and Middlesex batting coach Mark Ramprakash: "Sam is the opener that you want to have in your team. He plays straight and late, is very calm at the crease and looks to build an innings in a very old-fashioned way. Once he gets in, he doesn't throw it away. He is ready for Test cricket."

For what it's worth, Ballance is the man in possession, having made his Test debut in the defeat at Sydney. Though scores of 18 and seven were hardly eye-catching, they should be taken in the context of one final horrible England batting display.

When Ballance came into the England side for Joe Root in the final Ashes Test, he was not only replacing his Yorkshire team-mate, but also his housemate.

In contrast to Robson, left-hander Ballance is a three-format player. The Yorkshire hierarchy state that his best innings for the Tykes have come when the White Rose have been pinned against the wall in four-day cricket, but it is his ability to destroy attacks that is causing most excitement.

Yorkshire were already 249 runs ahead when Ballance strolled to the crease late on the second day. After riding a Steven Finn storm that evening, the Zimbabwe-born 24-year-old calmly dismantled the Middlesex attack on day three. In his 130, Ballance hit five sixes and took 56 from the final 21 balls he faced.

With that knock coming on the back of a big hundred against Northants the previous week, Ballance is leading the race to have the first shot at filling the Pietersen-shaped hole in England's middle order.

Yorkshire coach Jason Gillespie: "What more can he do? Selectors ask players to make them pick you. He's currently in the Test side and all he has done since last Test is score runs. He's given himself the best chance to be selected."

The left-hander has focused almost exclusively on limited-overs cricket since being dropped from the Test side in early 2012, playing only two Championship games last season. However, he signalled his desire to once again play in the longer form by turning down this year's IPL to play in Middlesex's early Championship games.

When Morgan lined up for Middlesex in their season-opener against Sussex, it was the first time in five years he had played a match in England in April.

A first-class average of only 34 would have to be ignored if Morgan is to be given a recall, which would more likely be based on a temperament that has time and again been proven on the international stage in one-dayers and T20s. The ugly crouch that characterised his first crack at Test cricket is gone, but questions remain over his technique and patience.

The flash to fall to Ryan Sidebottom in the first innings against Yorkshire was not the shot of a Test number five and Morgan again failed in the second inning as Middlesex pulled off their astonishing run chase. The Dubliner looks likely to miss out for the time being.

Ramprakash: "We know that he has a fantastic temperament but he is now much more mature and aware of what is needed to succeed against the red ball. The fact he has played in huge matches and come through with flying colours goes in his favour, but he knows he needs runs. As a result, his focus for Middlesex this season has been excellent and he is doing very well in grasping the rhythm of four-day cricket."

The question for Root is not if, but where? When stating his desire to occupy number four for England, did he realise that is the only position in the top six he has not been chosen to bat at?

Regular Yorkshire skipper Andrew Gale dropped himself to make way for Root against Middlesex. In leading the side, Root became the youngest man to captain Yorkshire in a first-class match since Lord Hawke in 1882.

Even though the 23-year-old was dropped for the final Ashes Test, it would be a huge surprise if he is not selected to face Sri Lanka. However, Bell's likely presence at four looks to leave Root coming in first wicket down.

The right-hander returned from a broken thumb with a fluent 63 in the second innings at Lord's, the highlight of which was a duel with Finn in which the pace bowler was hooked for six and later taken for three boundaries in the same over.

Still, Root's tendency to get stuck in the crease was again highlighted - in both innings he was pinned leg before by his international team-mate.

Yorkshire director of cricket and former England opener Martyn Moxon: "He got all his runs to be picked for England opening the innings. He's a capable opener with the potential to be a Test opener, but he's got to want to do that. If he's not wanting to open, then it will be more difficult for him to do it. There needs to be a decision on where he bats, then sticking to it. Chopping and changing won't help."