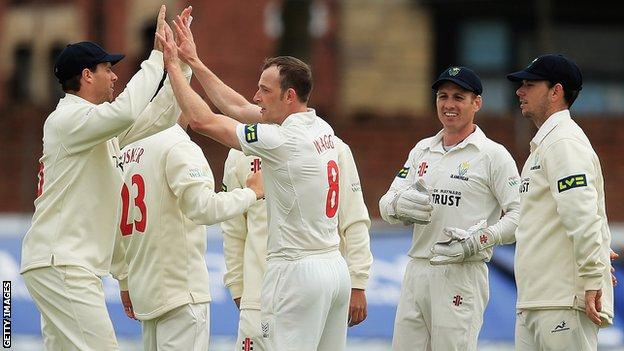 Glamorgan could sign a seam bowler on loan in time for the visit of Worcestershire on Sunday, says coach Toby Radford.

Australian seamer Michael Hogan is absent for the next two games because of the birth of his second child.

Glamorgan's seam attack struggled without him in their draw against Leicestershire, conceding 500 runs in the first innings.

"We've been talking about bringing a loan bowler in," said Radford.

"I think we are also very keen to give some of our home-grown young bowlers a chance as well, so it's trying to get that mix.

"We are keen to try our own but we also want to try and get wins as well, so it's trying to be as competitive as possible."

Glamorgan's draw at Leicestershire means they are unbeaten in their first three games of the County Championship season.

Stuart Walters survived two-and-a-half hours for 57 not out to deny Leicestershire their first championship win since 2012.

He was helped by John Glover's 19 from 51 deliveries as Glamorgan finished on 250-7.

Radford says he is pleased his men stood firm to hold on for the draw.

"I think there was a point with an hour to go where you just wondered whether we would crumble and lose our bonus points and come away with a loss.

"But they really dug deep and played very well."