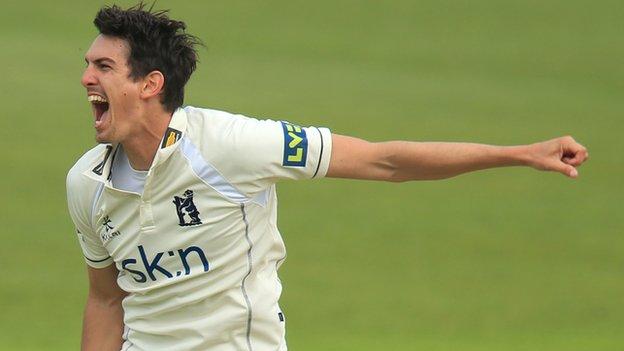 Middlesex collapsed from 34-0 to 66-8 before the tail wagged to see them 167 all out, last man Steve Finn weighing in with an unbeaten 37.

Toby Roland-Jones then took the first two of his three wickets to reduce the Bears to 27-2 in reply.

But Bears debutant Sam Hain hit 42 as Warwickshire rallied to close on 123-4.

Teenager Hain played on to Roland-Jones, but Ateeq Javid (27 not out) and Tim Ambrose have so far put on 21 for the fifth wicket, with the prospect of a first-innings lead to come on day two.

Following Wednesday's record-breaking run chase against Yorkshire, when Chris Rogers hit an unbeaten 241 as Middlesex chased down 472-3 to win at Lord's, it was no surprise when the visiting captain chose to bat at Edgbaston after winning the toss.

But a superb catch at third slip from Laurie Evans off Wright removed England hopeful Sam Robson and began a remarkable collapse as the visitors lost eight wickets for 32 runs.

Thanks to more stunning catching from Evans and stand-in skipper Varun Chopra, who pouched four, Oliver Hannon-Dalby and Richard Jones, on his Championship debut for Worcestershire, claimed two wickets apiece.

Bears on roll against Middlesex

But the luckless Hannon-Dalby's efforts came at a cost, having picked up a side strain that will prevent him bowling for the rest of the match.

After missing the second half of last season with a broken arm, the former Yorkshire paceman could now be sidelined for several weeks, to further deplete a bowling attack already deprived of Chris Woakes (absent on England duty) and Rikki Clarke (broken finger).

Fit-again Wright's four-wicket haul, his second in successive matches, took his tally of Division One scalps for the season to 13.

"It didn't feel like a 14-wicket day when Chris Rogers won the toss, or at any point afterwards, but the bowling was of a high standard.

"Much more encouraging for Warwickshire was the assured debut of 18-year-old Sam Hain. Confident and unhurried, his strokes - especially flicks to midwicket and fine leg - suggested he has been studying Jonathan Trott at close quarters. He played on to the excellent Toby Roland-Jones shortly before the close, but should temper his obvious disappointment with the knowledge that he made a very favourable first impression.

"Warwickshire edged the first day at Edgbaston after Middlesex fought back from a wretched morning.

"The visitors' collapse from 34 without loss to 66-8 was the result of loose shots. There appeared no way back but the tail gave themselves something to bowl at, the last two wickets more than doubling the score.

"There is a little bit in the pitch for the bowlers but Middlesex need further wickets fast or they could face a prolonged period in the field tomorrow."