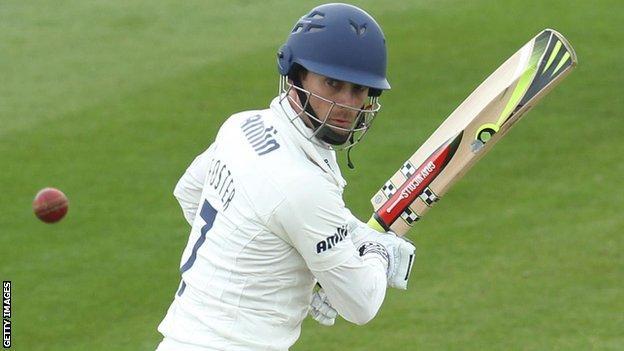 Essex skipper James Foster enjoyed another good batting day against Leicestershire as he guided his side to 254-6 on the opening day at Chelmsford.

Foster, who has hit six Championship tons against the Foxes, made 82 before falling to the last ball of the day.

Charlie Shreck bowled superbly without reward, but it was Nathan Buck (3-64) who finally had Foster lbw.

Foster has liking for Foxes

Shreck's lunchtime figures of 0-9 from 10 overs were indicative of how hard Essex found scoring during the morning.

But it was the loss of Jaik Mickleburgh, Greg Smith and Ben Foakes in the space of eight balls during the afternoon that put them in trouble.

Foster, however, made the most of two let-offs, collecting 10 fours as he and Pettini, who was caught by Angus Robson off Buck, put the game back in the balance.

Essex gave debuts to new signings Oliver Newby, on loan from Lancashire, and Tanveer Sikander, while Kishen Velani, 18 not out at the close, was given his second first-class appearance.

"This was a fascinating day's play which began with Essex announcing a near unrecognisable line-up because of international call-ups and injury.

"Having won the toss and elected to bat, they sent the crowd to sleep by scoring just three runs in the first half-hour on the way to 59-1 at lunch.

"The alarm bells rang for the home side when they lost three quick wickets in a five-minute spell just after the break, and at that point, it looked like they might be skittled for 150.

"But cometh the hour, cometh the captain, as Foster and Pettini steadied a shaky Essex ship. Foster was dropped by and dropped off spinner Naik, but his dismissal gave tired bowlers a lift."