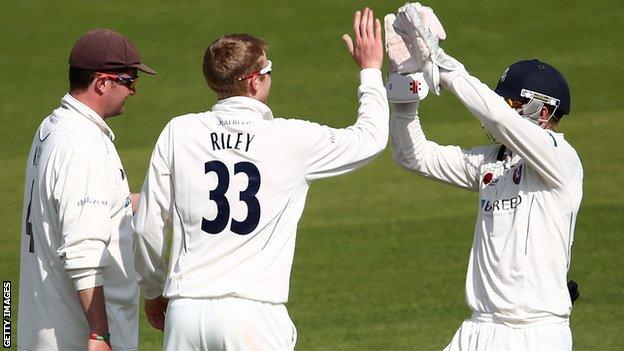 Kent look set for a comfortable victory after a disappointing batting display from Surrey on day three at Canterbury.

"Kent have been the better side in this game and, at one stage, it looked like they would wrap up victory inside three days.

"But Matthew Dunn and Stuart Meaker batted for 15 overs until Meaker went in the final over of the day as Surrey closed with a lead of 20.

"The problem for the visitors is they are already nine down after some excellent bowling from Kent in the afternoon.

"Adam Riley was particularly impressive and unless their is a monsoon in Canterbury tomorrow Kent should wrap up victory in the morning session."

"Kent outplayed Surrey again on day three. It started auspiciously for the away side with two early wickets, but as Kent stretched their lead to 150, it was always going to be tough to get into a position to save the match.

"The accurate Riley and persistent Claydon were good for their wickets in long spells bowled during the afternoon, with a bit more luck they could have finished the game off comfortably by the close.

"The 15 and a half overs Meaker and Dunn batted for the ninth wicket showed an application and grit that could serve this young Surrey team well in games to come, but barring a miracle Kent will quickly wrap up a victory they fully deserve."