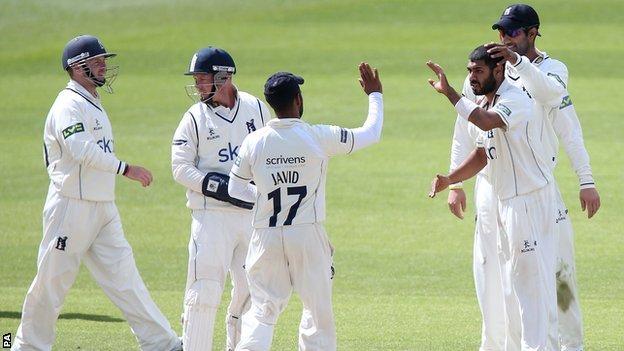 Warwickshire made it back-to-back Division One wins as they claimed the extra half hour to beat Middlesex by an innings and 37 runs at Edgbaston.

After trailing by 297 on first innings, Middlesex lunched at ease on 100-1.

But the Bears had the best of the afternoon session, removing captain Chris Rogers (82) and Sam Robson (68).

And, from 155-1, the Middlesex collapse continued, Jeetan Patel (4-78) taking wickets in successive balls as the visitors were bowled out for 248.

Richard Jones also weighed in with 3-53 to finish with five wickets in the match on his Warwickshire County Championship debut - following his end of season move from Worcestershire.

Having begun their reply began with a single maiden over on Monday evening, Middlesex lost only nightwatchman James Harris in the morning session.

Visiting skipper Rogers, fresh from his 241 not out against Yorkshire, hinted at a repeat rescue act when he put on 149 for the second wicket with Robson.

But there was to be no repeat of Middlesex's record-breaking win against the Tykes, as, once Patel had trapped the Australian Test opener leg before wicket, Middlesex lost their last nine wickets for just 93.

Rain brought an early tea to hinder the hosts' progress but, with eight wickets down when play was due to finish 30 minutes after the scheduled close, they claimed the extra half hour.

Bears on roll against Middlesex

And, having turned to Patel's spin, they were soon rewarded - to win with a day to spare and follow up last week's three-day victory at Trent Bridge against Nottinghamshire.

Warwickshire's winy takes the 2012 winners to the top of the County Championship - and they will stay there unless Sussex or Somerset triumph on Wednesday.

The Bears are back in action against Yorkshire at Headingley on Sunday, while Middlesex host Lancashire at Lord's - the last round of Championship fixtures before this year's T20 Blast gets underway.

"The regular absence of a number of senior players was often cited as a reason why Warwickshire's title challenge last year didn't really get started. But in this match they made light of their problems.

"A bowler down following Oliver Hannon-Dalby's injury, Richard Jones shouldered the additional burden with great enthusiasm on his Championship debut for the county, and deserved his rewards.

"Middlesex may well be highly critical of themselves after collapses of eight wickets for 32 and seven wickets for 60 in generally favourable batting conditions. But the quality of the bowling was a major factor too.

"The third day might have proved hard work for Warwickshire, and it took a while to dislodge Chris Rogers and Sam Robson, but afterwards they poured through the breach."

"It's frustrating. They're trying so hard but it's just not quite happening. That's the way it went today and we've got to fix it really.

"You give them a rocket and that may not be the best thing to do.

"Everyone is trying. There's no doubt they're trying as hard as they can.

"But the results aren't going their way so you've got to hang in. We're a team and hopefully we'll turn this around."