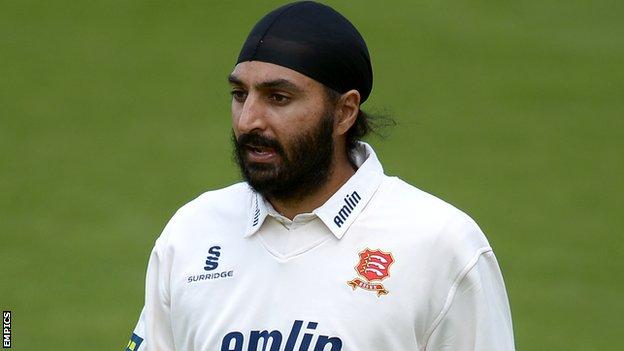 Monty Panesar led Essex's revival as he finished with figures of 6-111 on day three against Leicestershire.

The visitors resumed on 255-2 and Ned Eckersley (110) added six to his overnight score, while Angus Robson struck 94 and Josh Cobb 70.

The hosts closed 51 runs behind on 101-1 in their second innings, with Jaik Mickleburgh unbeaten on 47 and Greg Smith 43 not out.

"Essex enjoyed very much the better of day three, despite conceding a first-innings lead of 152.

"The highlight of the day was the superb bowling of Monty Panesar, who bagged his first five-for for Essex.

"He flighted the ball to great effect, taking three wickets in an over and almost claiming a hat-trick."

"Another wicket or two in the evening session and Leicestershire would have been confident of forcing the win.

"The comfort with which Greg Smith and Jaik Mickleburgh saw out the final 90 minutes suggests it's going to be hard going for the Foxes.

"Despite taking six wickets, some with deliveries that turned markedly from the River End, Monty Panesar reckons the wicket is actually pretty flat, which will add to Leicestershire's concerns.

"Even so, it was an entertaining afternoon's session as the visitors chased quick runs, and with wickets falling in clumps throughout the game, a draw is far from a foregone conclusion if the visitors can make an early breakthrough."