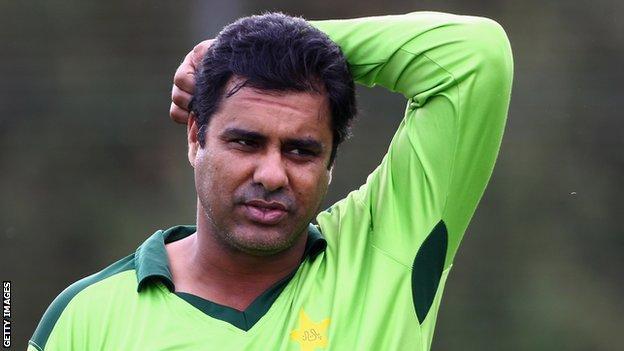 Former captain Waqar Younis has been appointed Pakistan coach for the second time, nearly three years after quitting for personal and health reasons.

The Pakistan Cricket Board (PCB) announced in a statement that Waqar had been given a two-year contract.

Waqar, 42, said: "My immediate aim is to prepare the team for the upcoming busy season and next year's World Cup."

Former coach Dav Whatmore decided in February not to extend his two-year contract with the PCB.

Another former captain, Moin Khan, was named interim coach for the Asia Cup and World Twenty20 tournaments earlier this year and has now been appointed chief selector and manager for Pakistan.

Waqar, who took 373 Test and 416 one-day wickets, formed a formidable new-ball attack with Wasim Akram in the 1990s before retiring in 2003.

He was appointed Pakistan coach in March 2010 but left the post in August 2011.

During his first spell as coach three players were banned over a spot-fixing scandal during the tour of England in 2010 and there was a falling out with former captain Shahid Afridi.

Waqar is Pakistan's seventh coaching appointment since 2008 in a list that also includes the Australian Geoff Lawson, Intikhab Alam and Mohsin Khan.