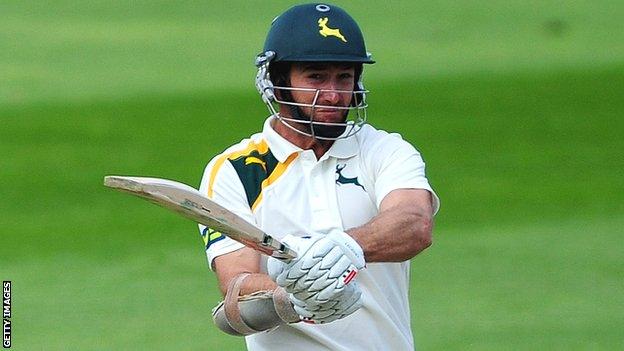 Phil Jaques scored his maiden century for Nottinghamshire as his side's match at Somerset finished as a draw.

The day was interrupted by rain, which ended any lingering hopes of either forcing an unlikely victory.

Notts resumed on 97-2 and were 322-4 when the captains shook hands, with both sides taking 12 points.

Nottinghamshire's last victory at Taunton was a nine-wicket success in April 1985.

Tim Robinson scored 105 for Notts in the first innings, while Ian Botham made 90 and 50 for Somerset.

Jaques hit 17 boundaries in his unbeaten 150, while Samit Patel blitzed his way to 75 from 83 balls after scoring a ton in the first innings.

Earlier, Alfonso Thomas picked up the wicket of James Taylor for five in only the second over of the day.

Patel and Jaques shared a rapid fourth-wicket partnership worth 113, before Patel was bowled by Johann Myburgh and Nottinghamshire opted to bat out the rest of the day.

Riki Wessels, who was unbeaten on 40 at the close, joined Jaques at the crease and the pair put on an unbroken 106.

If Notts had opted to set Somerset a target, they would have been without seamer Jake Ball, who will now miss a large chunk of the upcoming T20 Blast competition.

The 23-year-old was injured after bowling only two overs on the second day at Taunton and has been ruled out for six weeks with a broken bone in his foot.

Somerset are third in the Division One table after four matches, six points behind early-season leaders Warwickshire, while Notts are a further 11 points behind in sixth.

"The draw that had seemed inevitable for most of the last two days was duly confirmed when the players shook hands shortly before five o'clock.

"But, if it was unexciting fare for the spectators, Phil Jaques certainly enjoyed the day as he took full toll of Somerset's part-time bowlers.

"Both sides will take something from this game - the accuracy of their bowling and the form of Jaques and Samit Patel with the bat for Notts, and useful knocks from Peter Trego, Alviro Petersen and captain Marcus Trescothick for Somerset.

"But Somerset will have to do something about the pitches here, if games are to finish in anything other than high-scoring draws."

"With both sides having gone beyond 400 in their first innings, the final day's exchanges were purely about individual gain and Phil Jaques made the most of the opportunity.

"A model of concentration and professionalism, he demonstrated all the qualities that prompted the decision to sign him."