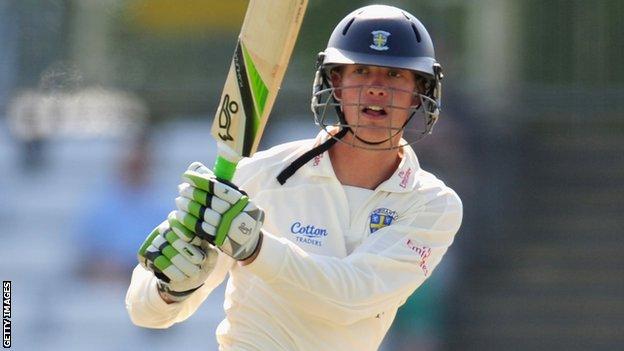 Defiant batting by Durham, with a little help from the weather, enabled them to hold out for a draw on the final day against Yorkshire.

The reigning county champions had to follow on 201 in arrears after being bowled out for 388.

And they were in trouble after slumping to 42-4, with Kumar Sangakkara only adding 14 to his first-innings duck.

Yorkshire suffered frustration as their highly-rated attack was unable to force a win for the second successive week, after Middlesex chased down a target of 472 to beat them by seven wickets at Lord's.

But it was never going to be an easy task on a pitch that had yielded 950 runs over the first three days of the match.

It took 23 overs for Yorkshire to claim the final two wickets to end Durham's first innings, with Jamie Harrison bowled by Kane Williamson for 31 after a stand of 45 with Graham Onions, who was last to go for 21 when he edged a ball from Liam Plunkett to the keeper.

Despite his side having been out in the field for 138 overs in total, Yorkshire captain Andrew Gale had no option but to enforce the follow-on and they earned a bonus wicket when Plunkett diverted a stroke from Jennings into the stumps at the bowler's end to run out Mark Stoneman for four.

Scott Borthwick was caught behind off the next ball, the opening delivery of an over from Jack Brooks, and Sangakkara followed when Adam Lyth took a slip chance off Ryan Sidebottom, having been dropped earlier in his brief innings.

First-innings centurion Mark Richardson edged leg-spinner Adil Rashid to the wicketkeeper three overs later, but Jennings, who reached his half century off 158 balls, and Collingwood were unmoved.

They added 58 and even Jonny Bairstow being given his first over in Championship cricket failed to break their concentration.

"This was not easy on the eye by any imagination. In fact, at times it was stupifying, but Durham will not mind that after drawing a game in which they were always on the back foot.

"Captain Colly has headed out to the middle many times in his career with a rescue job on his hands. He joined Jennings after Durham were reduced to 42-4 in 18 overs, but they got their heads down and batted out the next 35 to see the game home.

"Jennings faced 166 balls while Collingwood faced 91 for 14. The run rate for the innings was a staggeringly low 1.8 an over - but it was job done for the home side."