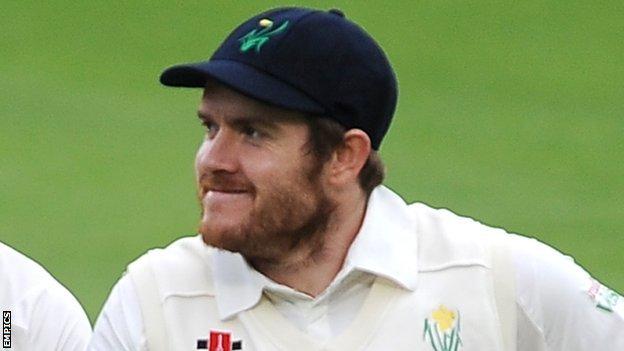 Will Bragg led the way with a dogged, unbeaten 91 at Cardiff to deny Division Two leaders Worcestershire a third straight County Championship win.

Resuming on 14-1, Glamorgan looked in trouble when Gareth Andrew struck and Jack Shantry claimed two wickets to leave the home side in bother on 38-4.

But, after two more wickets in the afternoon session, Bragg dug in with his skipper Mark Wallace, who made 47.

Worcestershire have not enjoyed three successive Championship wins since beating Glamorgan by 10 wickets at New Road, Middlesex by the same score at Lord's and Gloucestershire by an innings and 142 runs at Cheltenham in 2008. Skipper Daryl Mitchell and bowling coach Matt Mason are the only survivors from that team.

Worcestershire were disappointed at missing the chance to claim three Championship wins for the first time in six years, but the nine points they took from their second draw of the season allowed them to stretch their lead at the top to 11 points over second-placed Hampshire.

Visiting skipper Daryl Mitchell's decision to bring on Shantry, rather than star Pakistan spinner Saeed Ajmal, was rewarded when he took two quick wickets in the morning session. But Worcestershire were then held up by a 52-run stand between Bragg and Stewart Walters.

Walters was taken soon after lunch at leg slip off Ajmal, the spinner's first wicket of the innings. And, when Charlie Morris bowled Jim Allenby, victory seemed assured.

But Wallace, who had hit an unbeaten half-century in the first innings only to run out of partners, this time found support from Bragg.

When the skies opened with 12 overs still due to be bowled it looked like there might be an early finish. But, although Ajmal claimed a second wicket, finally trapping Wallace, after a quick resumption, Bragg and Graeme Wagg saw it though.

"We didn't pull it off, but I'm still proud of the way we fought, the way we played. It wasn't to be. You need a bit of luck and, another day, we'd have bowled them out. But I can't fault the lads' efforts.

"We've bowled nearly 100 overs, but Glamorgan batted well in very tough, blustery conditions. Mark Wallace played a captain's innings and for Will Bragg to bat so long against Saeed Ajmal was a great effort.

"Although we haven't won, we can't forget the outstanding display of Daryl Mitchell in this game. To score the runs he has so far this season he's done a really fine job.

"They'll be picking Test teams soon and, although he might not get in the side, I'd like to think he might at least get a mention."