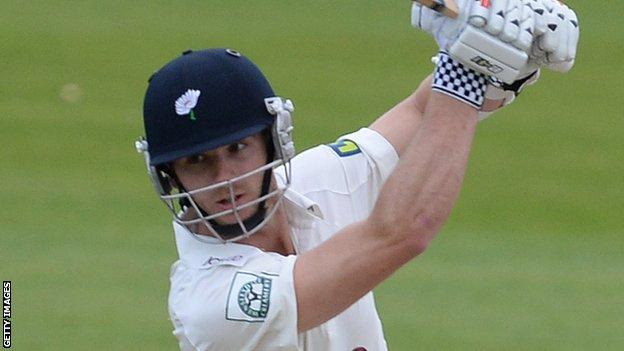 New Zealander Williamson (75) and Bresnan (61) came together with the hosts on 181-6 and put on 113 before the pair were dismissed in successive overs as Yorkshire closed on 310-8.

Keith Barker and Chris Woakes picked up three wickets each for Warwickshire.

Root, who stepped up to open the innings with Alex Lees dropping out of the side, gave the England selectors something to think about when they consider an opening partner for Alastair Cook this summer by stroking a flurry of boundaries to move to his fifty off just 59 balls.

Yorkshire have won five and drawn three of their last nine home Championship matches against Warwickshire.

The 23-year-old had put on 91 for the first-wicket with Adam Lyth before Lyth mistimed a pull shot off Woakes to give the England seamer a return catch.

After looking relatively untroubled throughout the morning session, Root was dismissed just after lunch when he chopped a ball from Barker onto his stumps and captain Andrew Gale followed him back into the pavilion shortly afterwards when he played on to a ball from Woakes which appeared to keep low.

Gary Ballance was trapped in front by Barker in the next over for four, just moments after receiving lengthy treatment on his right elbow following a blow from Woakes.

Chris Wright then returned to the attack to pick up the wickets of Jonny Bairstow (15) and Adil Rashid (10) to leave Yorkshire wobbling, before Williamson and Bresnan began to take charge.

Williamson struck six fours and a six in his 184-ball knock and looked set to see out the day before he was out lbw to Barker and six balls later Bresnan was bowled by Woakes while attempting a drive.

Liam Plunkett (four not out) and Steven Patterson (12 not out) saw Yorkshire through to stumps.

"A day when both these counties had their moments to savour.

"Yorkshire were on top until early afternoon with Joe Root giving them a great launch pad.

"But then 111-1 became 181-6 as Chris Woakes and Keith Barker bowled well for Warwickshire.

"Kane Williamson, with 75, and Tim Bresnan, with 61, put on 113 for the seventh wicket, but both went towards the end as Warwickshire rallied again."