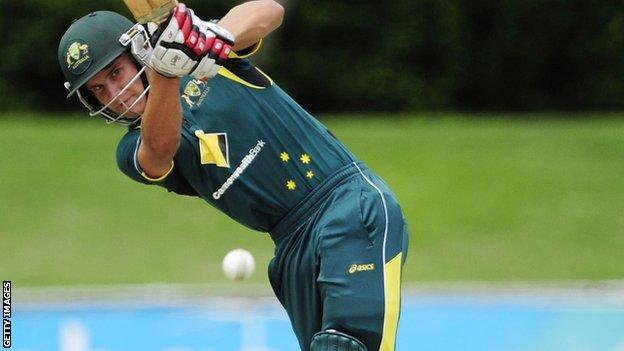 Batsman Hain, 18, made 42 in his first innings for the Bears in their convincing win over Middlesex.

"We knew he had ability but, until you get the chance to play at this level, you don't know what that ability is going to be," Brown told BBC WM.

Who is Sam Hain?

"It's a massive tick in the box over how he's gone about his work."

Hong Kong-born Hain is a former Australia Under-19 player, but has been on Warwickshire's radar since making his debut for the Bears' second eleven four years ago.

He signed a contract with the county in 2012 and made his debut in a YB40 game against local rivals Worcestershire the following summer, when he was out for just a single.

But his display against Middlesex impressed Brown, who is trying not to put too much pressure on him.

"Going out and batting against the likes of Steven Finn and Toby Roland-Jones, and playing with the assurance he did, is testament to where he is at the moment with his cricket," Brown said.

"Batting at number four, filling Ian Bell's shoes, he did really well. How much he'll play in the season, we don't know."

Hain is likely to make way for the returning Bell for Warwickshire's next Championship match against Yorkshire starting on Sunday, as the 2012 county champions look for a third straight win in Division One.

And Brown knows he faces some tough decisions over his final eleven.

"It's a nice problem to have and we may have to leave senior players and some international players out," he said.

"We're in a good space and whoever goes out onto the park will give a good account of themselves."