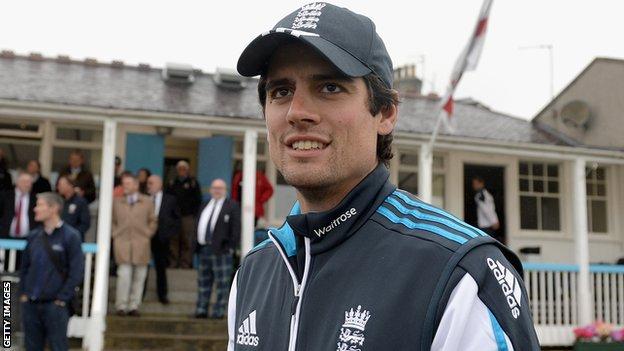 England had to negotiate "borderline conditions" to beat Scotland in a rain-hit one-day international in Aberdeen, according to captain Alastair Cook.

In a match reduced to 20-overs-a-side after heavy rain, England won by 39 runs under the Duckworth/Lewis method on Peter Moores's return as head coach.

Cook said: "It probably wasn't fit to play, if you are being totally honest.

"But just in a one-off game, with not so much riding on it, I think it was the right decision to play."

Ian Bell top scored for England with 50, while a career-best 4-40 by off-spinner James Tredwell helped the visitors secure victory.

But Cook played a big part in the game being completed in front of a sell-out crowd, putting on an opening stand of 83 with Bell when he could have left the field during a heavy downpour.

"Those conditions are as wet as I have ever fielded in," he said.

"I was in standing water at mid-off, and there were other patches like that, but both sides just got on with it.

"I thought the way Scotland fielded, especially in those conditions, was exceptional."

Michael Leask top scored in the Scotland innings with a 16-ball 42.

Cook said: "He has got a lovely swing of the bat - and when he hit it, it stayed hit.

"He was dangerous, and that's what Twenty20 cricket is about. One guy can win a game."