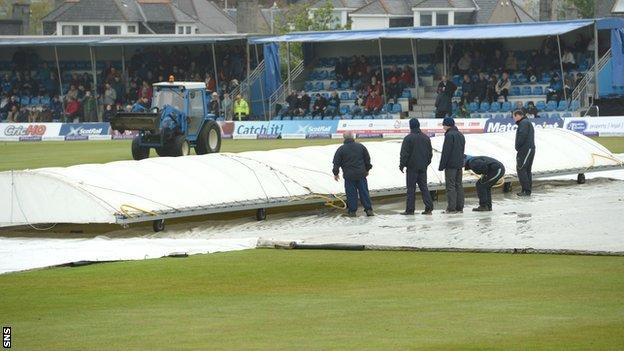 People looking for the reason why cricket is not as big in Scotland as it is some other parts of the world, could perhaps have found the answer at Aberdeen's Mannofield Park on Friday.

Hundreds of spectators showed up first thing hoping to see a whole day of Scotland taking on England in what promised to be a juicy encounter.

But as the morning wore on that prospect was looking more and more forlorn from under the umbrellas.

However, as if by magic, when afternoon arrived along came a chink of brilliant blue in the otherwise dark, brooding clouds.

As the sliver of brightness grew the groundsmen sprang into action. First they checked the plastic sheeting that they had carefully placed over the most important areas of the pitch to keep the water off.

Then out came a whole array of machines, among them the brilliantly named "super soppers", basically giant sponges on wheels.

The linchpin to these herculean efforts was the head groundsman at Aberdeenshire Cricket Club, Ken McCurdie. His dedication to duty resulted in his arm being left in a sling after he tore a muscle.

At this stage the players too were doing their bit through "squelch tests", perhaps not the most scientific method, but nevertheless effective.

Some heads nodded optimistically while others were shaken as England and Scotland team members bounced gently on the turf to see if muddy water bubbled up from under their feet.

Finally, rather late in the day, the spectators' patience was rewarded when they got the news they'd been waiting for.

Play had been scheduled to start at four o'clock.

Although black clouds were still lingering menacingly on the horizon, by the time proceedings got under way, steam was rising from the ground in the warm sunshine and many of the players donned baseball caps to shield their eyes.

Scotland won the toss and opted to bowl to take advantage of the underfoot conditions and they started well, limiting the number of English runs.

The crowd were, by now, in particularly good form due to the change in the weather and perhaps also the fact that the five-and-a-half-hour wait had been peppered with numerous visits to the beer tent.

There were loud cheers when England batsman Ian Bell was bowled by Robert Taylor, but only after he had scored a half century.

Just at that moment the heavens opened once more and out came the plastic covers again, much to the dismay of the crowd.

But after this brief scare the rain cleared again allowing play to resume now in a shortened 20-over format, and shortly after Calum MacLeod pulled off a spectacular catch to put an end to English captain Alastair Cook's innings.

England had got to an impressive 167-6 before it was Scotland's turn to bat leaving them with a mountain to climb.

The home side struggled to amass runs until man of the match Michael Leask stepped forward. He restored some hope to the Scots, hitting some great sixes and scoring 42 before being caught.

England were to win comfortably in the end though by 39 runs on the Duckworth-Lewis method.

However, the underdog Scots had not let themselves down and after a very respectable performance they walked off the pitch with heads held high.

And as for the Aberdeen weather, it had pulled through as well, by the narrowest of margins, after what could oh, so easily have been a wash-out.