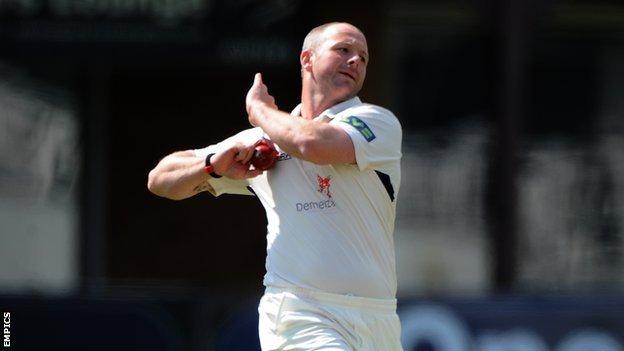 Darren Stevens and Doug Bollinger shared all 10 wickets to help Kent take control against Derbyshire at the County Ground.

Derbyshire recovered to 103-5 before Bollinger took three quick wickets to bowl out the home side for 118.

Kent then saw out the final three overs of the day to reach the close on 10-0.

Bollinger's second five-wicket haul of the summer took his tally for the season to 20, only Alex Hughes (36 not out) offering any real resistance for Derbyshire.

Like Bollinger, Stevens returned his best figures of the season so far, conceding just 24 runs off 20.3 overs, with 10 maidens.

"Kent made up for lost time - almost a day and a half of it - with a fine bowling performance on a pitch with a bit of moisture in it, against a Derbyshire batting line-up lacking in confidence.

"The conditions could have been made for the wobbly medium pace of Darren Stevens and, in Doug Bollinger, Kent had the perfect man to stop the emerging partnership of Gareth Cross and Alex Hughes. Skipper Rob Key kept him back to the end of the day so he could fly in and help mop the tail.

"The stats of Hughes' knock won't send shockwaves through county cricket, but it took some nerve to emerge from Kent's onslaught not out and with some fine shots to show too.

"There is still plenty in the wicket for Derbyshire's seamers on day three. We could yet have a mouth-watering dessert for this rain-delayed feast."