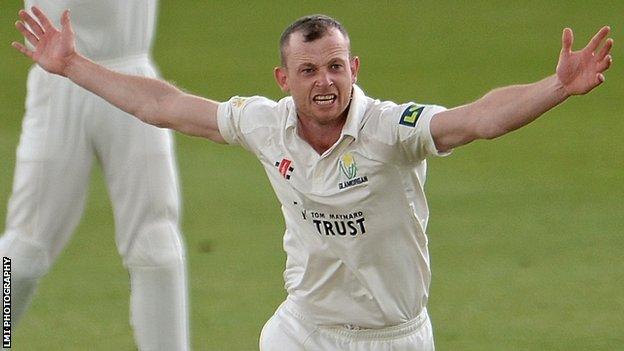 Glamorgan shaded a rain-affected second day against Hampshire, but will face a big first-innings deficit.

Resuming on 119-1, Hampshire moved ahead despite losing Michael Carberry (66) and Liam Dawson (64) after a second-wicket stand of 108.

James Vince eased past 50 but was eventually lbw to Graeme Wagg, as Glamorgan checked their progress.

"Frequent breaks for rain and a disciplined bowling performance from Glamorgan frustrated Hampshire as they were looking to build on a good start on day one.

"The home side will have hoped to have been more than 106 runs in front but Liam Dawson, who passed 50 for the first time this season and was one of three Hampshire batsmen out in the 60s, reckons that's a healthy advantage on a wicket still offering the bowlers some help.

"Seamer Graham Wagg, who has already completed 36 overs out of the 107 Hampshire have faced so far, is seemingly revelling in more responsibility with Michael Hogan still away."