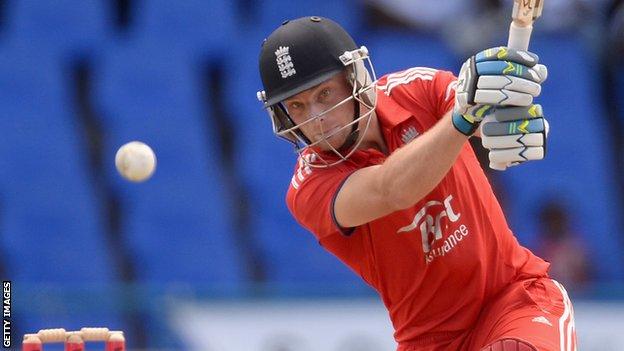 Lancashire wicket-keeper Jos Buttler says the schedule for the revamped T20 Blast means it will be "a challenge" for players to prepare properly.

The group stage begins on Friday and will run alongside the Championship campaign, rather than in a separate block of fixtures as in previous years.

Most T20 matches will take place on Fridays and at weekends, resulting in multiple switches between formats.

"I don't think it's ideal as a player," Buttler, 23, told BBC Radio Manchester.

The England international continued: "You want to be able to have specific training sessions and have a bit of time to prepare for the T20, but that's something you have to deal with.

"It will be really good to get the crowds in on Friday nights, but I think it's a real challenge for the players to find the time to practice their T20 skills in between the four-day matches."

Buttler will be one of the star attractions of the competition following a series of impressive displays at international level.

He has become a fixture in the limited-overs side since his international debut in 2011, producing a number of destructive batting displays for his country, most notably in the Caribbean earlier this year.

An innings of 99 from 84 balls against the West Indies in Antigua in March led legendary batsman Sir Viv Richards to describe Buttler, who also has aspirations to break into the Test team, as a "class act" and "one of the finest finishers in world cricket".

But he says his growing reputation will not add extra pressure on him to perform well.

"I place higher expectations on myself than other people would anyway," added the former Somerset player, who has played 28 one-day internationals and 35 T20 games for England.

"Naturally I want to do well. You want to try and entertain people, and being at a new club as well, I'm desperate to show my team-mates and the Lancashire fans what I can do."

Lancashire, who are in talks with retired ex-England captain Andrew Flintoff over a return to play in the T20 Blast, have yet to win the domestic T20 title since the competition's inception in 2003.

They have only appeared in the final once, losing to Somerset in 2005.

But all-rounder Tom Smith believes the arrival of Buttler and the return of Pakistan left-arm seamer Junaid Khan will give the Red Rose county, who start at Nottinghamshire on Friday, an excellent chance of reaching the finals day at Edgbaston on 23 August.

"He's a great signing for us, but it's not just him. We've got Jos now and you've seen what he can do in the shorter format. Some of the shots he can play - as a bowler, you've just got to stand there and scratch your head.

"He can turn a game and we've got lots of players who can do that."