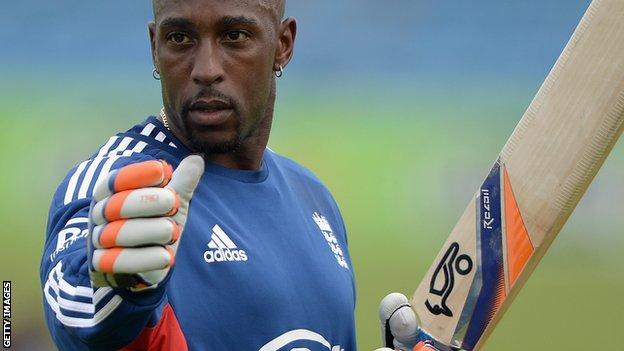 Batsman Michael Carberry and seamer Tim Bresnan have returned to the England squads for the Twenty20 and one-day series against Sri Lanka.

Carberry is back after criticising his omission from the ODI series in Australia last winter, while he was also overlooked for the limited-overs series in the West Indies this year.

Bresnan is available again after recently returning from a back injury.

"Michael Carberry has been chosen for both formats and, with an early hundred for Hampshire in the bank, he clearly retains a chance of keeping his Test place.

"Jade Dernbach and Luke Wright are the most obvious omissions as England urgently seek some positive momentum at the start of their international summer.

"With approximately 20 50-over matches to be played between now and the World Cup, it is important they settle on a first-choice XI as quickly as possible."

England play Sri Lanka in a T20 game on 20 May before a five-match ODI series.

National selector James Whitaker says he spoke with Carberry about 'miscommunications' between the player and England's management in Australia and says the matter has been resolved.

"Given his record over the last couple or three years of domestic limited-overs cricket for Hampshire, we feel Carberry deserves his chance if selected in the final XI," Whitaker said.

"I've had a chat with Carbs. He was selected last September for ODI's [in England] against Australia but not in Australia. He was frustrated.

"Nobody is perfect in this world. There were some miscommunications but they have been dealt with. It's over and we wish him well in this new environment."

Carberry, 33, says he is pleased to return to the squad and does not regret going public with his criticism of former England limited-overs coach Ashley Giles.

"It wasn't me damning anyone. I was expressing my opinion, which we are all entitled to do," he told BBC Radio Solent.

"We have had a chat, and since then the lines of communication have been A1. Comments on both sides have been taken on board, which is good, and not been taken personally, which is even better.

"I'm obviously delighted - it's nice to get the call-up and hopefully I will get some runs on the board."

The squad announcement is the second in the new era under coach Peter Moores, whose first match ended with victory over Scotland in a 50-over game shortened to 20 overs because of bad weather.

Batsman Ian Bell, who made 50 in that game, has retained his place in the T20 squad, despite not having played an international game in that format since January 2011.

Called up by then England limited-overs coach Ashley Giles for last year's World T20 as a replacement for the injured Joe Root, he did not play in the tournament.

Whitaker added: "He (Bell) has only played a limited amount of games but, with his experience, he can offer us some top-order presence."

Eoin Morgan will captain the T20 side in the absence of the injured Stuart Broad, while opener Michael Lumb, batsman Luke Wright and bowler Jade Dernbach have missed out after struggling in the World Twenty20.

Left-arm seamer Harry Gurney, who made his debut in the victory over Scotland, has been included in both squads to face Sri Lanka. The one-day squad covers the first three games.

"We are entering an important period of 50-over cricket with a World Cup less than nine months away," said Whitaker.

"This series against a skilful Sri Lankan side offers a chance to regain some momentum and for players to demonstrate the skill and passion we will need if we are to be serious contenders next year in Australia and New Zealand."

Fast bowler Dhammika Prasad is the only player from the 14-strong Asia Cup squad to miss out.