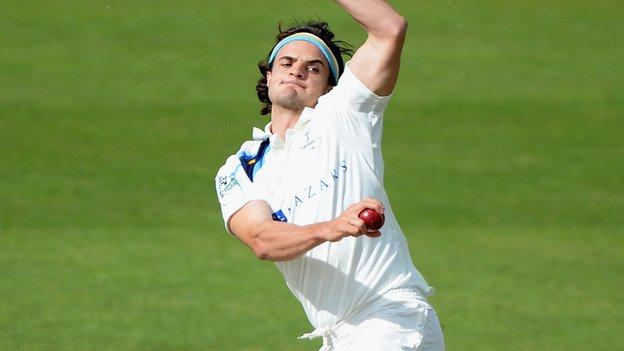 Yorkshire took 16 wickets in a day as they demolished Warwickshire by an innings and 155 runs to take over on top of the County Championship.

Jack Brooks led the way, taking 4-37 in the second innings to return match figures of 7-76, well supported by Liam Plunkett and Steve Patterson, who both took two wickets in each innings.

Only Ian Bell resisted, with 97, as the Bears were bowled out for 200.

But their second innings effort was much worse, dismissed for just 89.

After resuming on 136-6 in their first innings, needing a further 157 to avoid the follow-on, the visitors initially looked comfortable in the morning session, as Bell and Barker completed a 50 partnership.

But, when Plunkett had Barker caught behind, Warwickshire folded, slumping from 178-6 to 200 all out.

Patterson bowled Jeetan Patel, Richard Jones was leg before to Adil Rashid and then Bell was last man out, caught down the leg side, just three short of a third century in four Championship matches.

The Bears then reached 21-0 second time around before an even more alarming collapse begun when William Porterfield was caught at second slip off Brooks.

Tim Bresnan trapped Chopra leg before on the same score and with just four runs added, another two wickets fell, when Brooks bowled Evans for a sixth-ball duck before the prize wicket of Bell was taken, caught in the slips off his England team-mate Bresnan.

Ateeq Javid was then adjudged leg before to Brooks for the second time in the match to leave the Bears in dire straits on 31-5.

Woakes and Tim Ambrose rallied, putting on 49 for the sixth wicket, but Patterson then struck twice, bowling Ambrose before getting Barker caught behind.

It looked as if Dougie Brown's men might avoid a three-day defeat when Yorkshire were delayed by rain with the score on 84-7, but Patel was caught at second slip off Brooks immediately after the restart, before Plunkett removed Jones and Chris Wright with successive balls.

"When a team is bowled out cheaply do you praise the bowlers or lambast the batsmen? In this case, you should probably do both.

"Yorkshire's attack has been excellent. Jack Brooks looks a real talent and Liam Plunkett illustrated why he's getting increasing support from cricket correspondents for an England recall.

"There's depth there as well, which is why the Tykes are many people's favourites for the Championship.

"For Warwickshire, there's real concern about their batting. If you take out Ian Bell's runs so far this season there's little left and players who scored copious runs last season are struggling for form this time, notably Varun Chopra, Laurie Evans and Ateeq Javid."