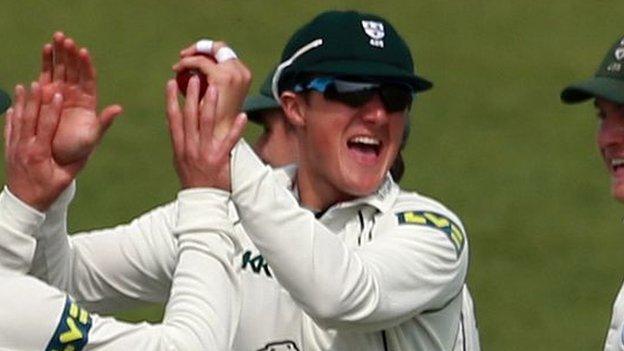 Having struggled since making his debut in the first County Championship game of the season, his highest score being 18, the 19-year-old fimnally came good, hitting 110 at Fenner's.

Kohler-Cadmore had made just 53 runs in his first four Division Two matches.

But his timely century followed a good Twenty20 knock in the Second XI.

"He's struggled," Worcestershire director of cricket Steve Rhodes. "When you have the sort of run of scores he's had, you can lose a bit of confidence.

"But he hit a good 100 in 50 balls for the seconds against Glamorgan on Friday and he's followed on from that.

"You can't beat having time out in the middle. It's the best net you can have. He needed to make a slight technical adjustment. And opening his shoulders to play a few shots in that Twenty20 game helped.

"He started finding the middle of the bat, and he's followed on from there. Confidence is a big thing in cricket, And hopefully this will be the start of something for him."

Kent-born Kohler-Cadmore was picked up by Worcestershire while he was completing his education at nearby Malvern College.

The teenager made his county debut while still at school last summer, compiling an impressive 47 against Bangladesh A in a one-day friendly at New Road.

His first century, aided by Joe Leach (51) and Ross Whiteley (43) helped Worcestershire close on 245-8 on Monday's first day against the Cambridge University students.

The visitors then took that on to 303-8 before declaring following a rain break Tuesday morning.

Worcestershire face a busy few days, with their opening two matches in this year's T20 Blast, against Durham at Chester-le-Street on Friday night and against Lancashire in Manchester on Saturday, followed by Sunday's Championship home game with Essex.

Moeen Ali will miss that, having been selected for England's Twenty20 international against Sri Lanka at The Oval next Tuesday night.

But, having been left out of England's one-day squad, announced on Tuesday, Moeen may be back for Worcestershire's third Twenty20 group game, against Nottinghamshire at Trent Bridge on 23 May.