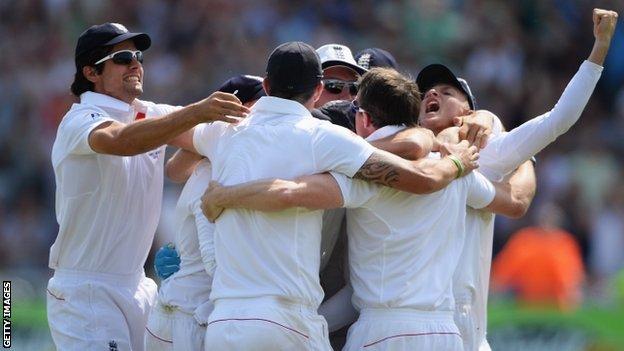 National selector James Whitaker admits he is "some way off" knowing England's best Test team, less than a month before the first match of the summer.

A new-look side will take on Sri Lanka at Lord's from 12 June following the departures of Kevin Pietersen, Graeme Swann and Jonathan Trott.

Wicketkeeper Matt Prior, 32, is not guaranteed a recall even if he proves his fitness, Whitaker also revealed.

Prior, a veteran of 75 Tests, lost his place to Yorkshire's Jonny Bairstow for the final two Tests of the 5-0 Ashes whitewash by Australia in the winter.

He has not kept wicket for Sussex since the start of April because of a long-standing Achilles problem, but is hopeful of returning on 26 May against Middlesex and proving his fitness for the first Test.

Whitaker, who heads a four-man selection panel, said Prior and Bairstow were among several keepers being considered, with Lancashire's Jos Buttler and Craig Kieswetter of Somerset also believed to be in contention.

Speaking while watching Bairstow play for Yorkshire against Warwickshire in the County Championship, Whitaker said: "Matt doesn't hold the wicketkeeping spot for England at the moment.

"He's optimistic about getting a couple of weeks of cricket in before he puts himself in contention for selection but I am watching a wicketkeeper here at Yorkshire who kept in the last Test or two in Australia.

"A number of people will be putting their hands up for that spot and Matt will be one hopefully. Who can say anyone is guaranteed a place?"

England also have question marks over captain Alastair Cook's opening partner, a middle-order replacement for Pietersen, a spinner to succeed Swann and the third seamer's berth.

While encouraged by the form of contenders such as Gary Ballance, Moeen Ali and Chris Jordan, Whitaker said he and fellow selectors Angus Fraser, Mick Newell and coach Peter Moores would use the next three weeks of Championship matches and the one-day series against Sri Lanka to narrow down their squad.

"We're some way off at the moment," he said. "I am very open-minded still, as are the other three.

"Peter is still getting his feet under the table and he has an open mind about the first Test team, which he should at this stage.

"It's important that the players playing county cricket feel that and know that. They are all playing their hearts out to be in that Test team and it's very encouraging that a number of players we are looking at are scoring runs, taking wickets and coming into form.

"There are places available for people to hold their hands up and push themselves forward into the first Test team."

Whitaker, a 52-year-old former Leicestershire batsman who played one Test for England, was cautious about fast bowler Steven Finn's chances of selection despite his impressive start to the season with Middlesex.

Finn was sent home from the Ashes tour after struggling with his action, rhythm and confidence and was not included in the one-day or Twenty20 squad to face Sri Lanka.

"Steven Finn is an exceptional talent and will be great for England's future," said Whitaker.

"At the moment we feel it's better that he regains his confidence, form and technique under the guidance of Richard Johnson and Angus Fraser.

"We will no doubt be talking about him in the very near future. But let's just be calm about Steven Finn. He must come back at the time when we feel he has regained his confidence and technique."