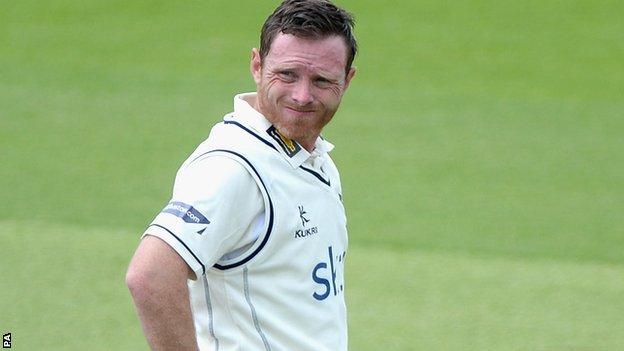 Warwickshire coach Dougie Brown says that the Bears have to find a way of replacing Ian Bell when the batsman heads off on England duty soon.

Having been replaced on top of the Championship after losing by an innings and 155 runs to Yorkshire at Headingley inside three days, the Bears now have a timely break from competitive action.

But Brown told BBC Coventry & Warwickshire: "We need to step up.

"Our front-line batters have to find a way to go out there and score runs."

The Bears are not scheduled to return to action until next Friday night for their first Twenty20 game of the summer against Yorkshire at Edgbaston.

And, by then, Bell will have begun what is expected to be a full summer playing for England against Sri Lanka and India, having been called up for the limited-overs squad.

Despite twice having been part of Warwickshire collapses that have led to them being bowled out for 87, against Sussex at Edgbaston last month, and 89 by Yorkshire on Tuesday, Bell is the Championship's top scorer in Division One, having plundered 506 runs in four matches.

And a Bears side still missing injured skipper Jim Troughton and the recovering Jonathan Trott could look badly denuded without stand-in skipper Bell too.

But there are alternatives available, namely former skipper Ian Westwood and youngsters Freddie Coleman and teenager Sam Hain, who made an assured 42 on his Championship debut in the innings victory against Middlesex last week.

"Ian Bell has been outstanding for us but we're going to lose him now," said Brown.

"We thought long and hard about the balance of the side coming into the Yorkshire game and, with Twenty20 round the corner, we thought it was worth sticking with the batters who have been the mainstay of the side so far.

"We have played on some pitches which have been in the bowlers' favour but you have to be able to front up on those pitches as well as the flat ones at the back end of the summer."

Warwickshire's next Championship match is at home to Somerset, starting on Sunday, 25 May, by which time their T20 Blast campaign will be underway, starting with a warm-up friendly for the Bears against Shropshire at Bridgnorth next Wednesday night.

England fast bowler Boyd Rankin will be fit for consideration, for what would be his first appearance since this winter's ill-fated Ashes tour, while Rikki Clarke is hoping to be back after recovering from a broken finger.

"Twenty20 is normally quite a good opportunity for those guys who've been short of runs to maybe get themselves going properly in the build-up to the next Championship game against Somerset," added Brown. "It gives us a chance to get back to hitting balls with a bit of intent."

Warwickshire will play all their games in this summer's Twenty20 Blast under the name of the Birmingham Bears.