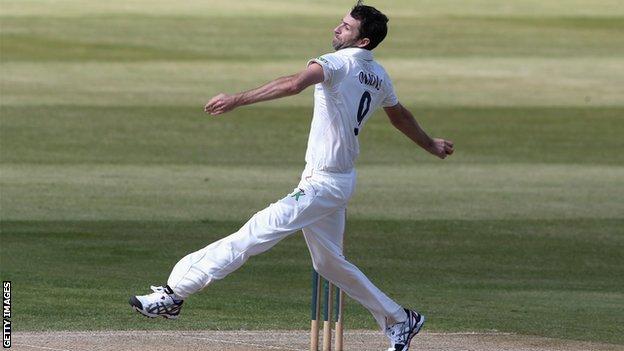 Durham captain Paul Collingwood says the results of scans on seamer Graham Onions' back were "a massive positive".

Onions on day one of their

In 2013, Onions was the County Championship Division One's leading wicket-taker as his 70 scalps helped Durham win the title.

This season, he already has 11 victims, though Durham have drawn all four games.

The 31-year-old England seamer, who missed almost 12 months with a back stress-fracture in 2010, did not bowl again at Hove and is expected to miss the next fortnight.

"He's really really sore, but had good results from the scans he's had," said Collingwood.

The 2013 county champions open their T20 Blast campaign with a home match against Worcestershire on Friday.

Two days later, they will travel more than 300 miles for the second four-day game in succession, this time to take on Somerset.

"I would have thought at this moment in time Graham would be struggling for the trip to Taunton," 37-year-old Collingwood told BBC Newcastle.

"He's going to have to play it by ear to see if he needs an injection or whatever course of action is needed and we'll get him back as quickly as we can."