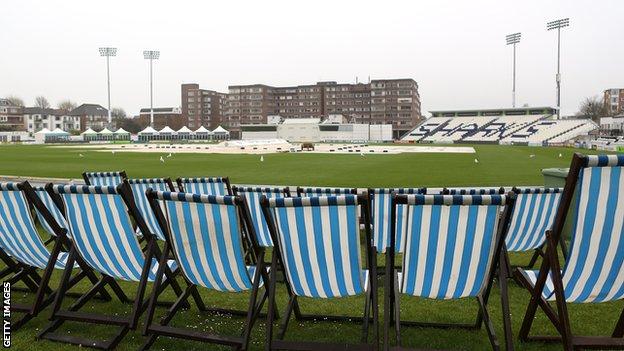 Sussex seamer Matthew Hobden has signed a two-year professional deal with the club which will run until 2016.

The 21-year-old right-armer came through the academy at Hove and has made one appearance for the county in List A competition.

"It's really nice to have the security of a new contract," Hobden said.

"It's great Sussex are backing me for that length of time, having come back from injury. I can now pace myself in terms of getting back to full fitness."

Eastbourne-born Hobden, who has made four first-class appearances for Cardiff MCCU and has featured for Sussex's second XI, had a shin injury which kept him out at the end of last season.

"I can solely concentrate on cricket now as I am about to finish University," he said.

"I'll be looking to prove myself in the second team and hopefully knock on the door of the first XI very soon."

"If he keeps his feet on the ground he should have a good career," Robinson said.

"He is working hard to get back up to fitness and should be soon starting to compete for a place in all forms of the game. We look forward to watching him develop."