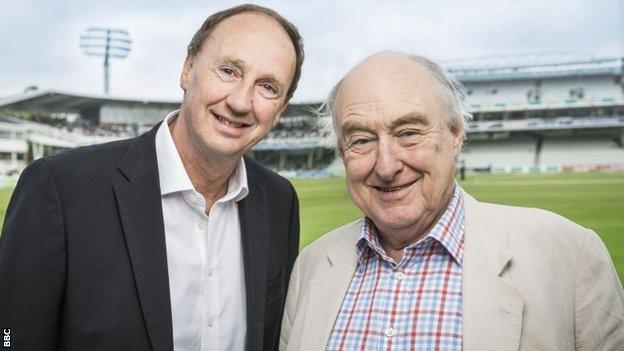 There has been plenty of flux in English cricket over the past few weeks, but there is something you can always rely on - Test Match Special.

We are back for our 57th summer covering ball-by-ball cricket and it promises to be a very special few months, with the World Twenty20 champions Sri Lanka and the world 50-over champions India both touring.

As always, we will have commentary on all of the games, starting with the T20 international against Sri Lanka at The Oval on Tuesday evening. The last time the two sides met in Bangladesh only a few weeks ago, England won an amazing game thanks to a hundred from Alex Hales.

We won't mention the match against the Netherlands which followed shortly afterwards!

All of the normal Test Match Special crew will be in action during the summer, including, of course, Henry Blofeld who will be with us 40 years after making his TMS debut at Old Trafford in 1974. A lot of buses and pigeons have passed the commentary box in that time!

Correspondent Jonathan Agnew will lead the ball-by-ball commentary team which will also include Simon Mann and Ed Smith plus Roshan Abeysinghe for the two-Test series against Sri Lanka, with Prakash Wakankar joining us for the five-Test India series.

Also this summer, Alison Mitchell and Charles Dagnall will be commentating on their first Test matches after previously being with us for one-day international games.

In terms of expert summarisers, you'll hear from our normal team of Geoff Boycott, Michael Vaughan, Phil Tufnell, Vic Marks and Alec Stewart, and joining us after a successful debut in the West Indies will be former England spinner Graeme Swann, who will be bringing us his unique perspective after his recent retirement from the international game.

We will also have some interesting guest summarisers, and look out for news of our overseas experts later on.

The analyst Simon Hughes will again be offering his alternative views on the game during our coverage, and this year we will have a longer build-up to each day's play in the Test matches with TMS going on air at 10:25 BST to allow for more detailed analysis.

After being part of the Test Match Special team on overseas tours for 10 years, Andrew Samson will be joining Malcolm Ashton as our TMS scorer for the summer. Andrew was named as the Statistician and Historian of the Year in March and he and Malcolm will make sure we are on top of all statistical matters.

You can listen to Test Match Special in so many ways - we want to make it as easy as possible to keep you in touch with the action. You can hear us on BBC Radio 5 live sports extra, BBC Radio 4 Long Wave, the BBC Sport website and via the BBC Sport app on mobile and tablet.

Plus, in an exciting sporting summer, BBC Radio 5 live will keep you up-to-date with the cricket with our regular 15-minute updates and analysis plus special programmes including the Tufnell and Vaughan Cricket Show.

No-one can leave the ground until Geoffrey has had his say!

After their successful winter in winning the Ashes and finishing runners-up in the World T20, England's women will be playing series against India and South Africa and TMS will have ball-by-ball commentary.

Our coverage of the women's game starts on Monday, with commentary on the star-studded MCC v Rest of the World fixture at Lord's. Injured England fast bowler Katherine Brunt will join Ebony Rainford-Brent and former England captain Clare Connor as experts for that match.

Of course, commentary of every ball of the County Championship has been under way since April via the BBC Sport website and the best of the domestic action will also continue on 5 Live sports extra led by Kevin Howells.

So if it is cricket you want, we have it all covered for you this summer with the BBC team and the iconic Test Match Special.

And I got through all that without mentioning cakes.