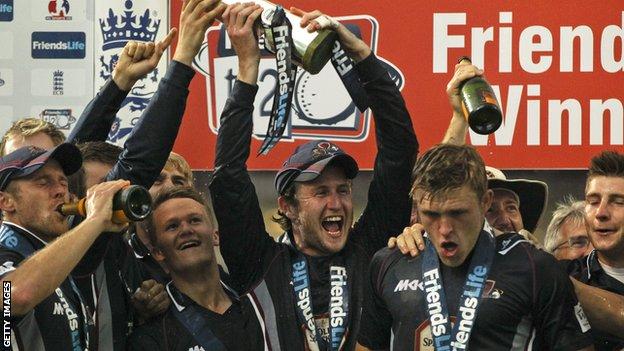 Big names, big hits and coloured kits can only mean it is Twenty20 time again for county cricket, and the England and Wales Cricket Board has given the competition a makeover for 2014.

With a snappy new title in 'T20 Blast' and the majority of games taking place on a Friday night, the competition has also been rescheduled to spread out the fixtures.

BBC Sport looks at how the competition will work and previews the players and teams to watch.

The main aim for all clubs is to be among the four teams to make it to Finals Day on Saturday, 23 August at Edgbaston.

All 18 clubs from Divisions One and Two will begin their journey in one of two groups of nine, south and north, with the top four from each group going through to the quarter-finals.

"This schedule has been designed to make the needs of the fans our number one priority, with nearly 70% of T20 group matches scheduled for Friday nights," chief executive David Collier told the ECB website.

"We are also excited about the role the T20 Blast will play in attracting a wider audience to our county game - with Friday nights providing the perfect opportunity for fans to combine a weekend night out with watching cricket."

However, the switch away from a three-week cluster of group games to an extended programme of fixtures has caused concern in some dressing rooms.

"In previous years we've been able to concentrate on one form of the game for a short period of time.

"Now four-day matches go onto Wednesday and we'll only really have Thursday to prepare for Friday. It means less practice, but it will have to be good quality practice when we do it."

agreed that the new schedule was not ideal.

"You want to be able to have specific training sessions and have a bit of time to prepare for the T20," he said.

"It will be really good to get the crowds in on Friday nights, but I think it's a real challenge for the players to find the time to practice their T20 skills in between the four-day matches."

Financial rewards may offset some of the on-field pressure points, and Gloucestershire chief executive Will Brown is in favour of the switch.

"The England and Wales Cricket Board have put a lot of thought into this and we now have the best schedule possible, with a majority of games played on Friday evenings and Sunday afternoons," Brown told the Bristol Post.

"This is the one thing that can make a big difference financially and it has come at the right time for county cricket. Twenty20 represents the biggest money-making area in the domestic game and is the only format that can significantly change a club's finances. For that reason alone, we need to make this work."

The list of stars signed up for the T20 Blast reads like a who's-who of international cricket, as almost every side has brought in a specialist to supplement domestic talent.

Big-hitters include and Indian Premier League stars Glenn Maxwell and Aaron Finch, who will feature for Hampshire and Yorkshire respectively, while bowling stand-outs include and Somerset's Dirk Nannes.

It is not just the imports who make the headlines.

Last year's top run-scorer was Craig Kieswetter at Somerset with 517, while Ben Stokes, hopes to return to fitness for Durham and add to his 22 sixes during 2013.

How will the holders go?

Northants were last year's winners, knocking off 192 to beat Surrey at Edgbaston.

That success was built on the powerful batting of Cameron White and Richard Levi, as well as the all-round skills of David Willey, who sealed victory in the final against Surrey with a hat-trick.

White is no longer with the county and both Willey and last season's skipper Alex Wakeley are struggling to overcome injuries.

Scotland's Kyle Coetzer will lead the Steelbacks this year and Levi's return adds flair to the batting, while they will be looking to New Zealand pace bowler Ian Butler to fill the wicket-taking gap in Willey's absence.

"The expectation is there now, when we went into the competition nobody really felt we had the chance," Levi told BBC Radio Northampton.

"If we do what we do as well as we do it then we have a really good chance.

"We've got a very similar squad to last year with one or two improvements coming in here and there. Hopefully the guys realise that."

Captain Ed particularly with the signing of Yasir Arafat adding to their bowling options, while Steven Finn is keen to impress for Middlesex and boost his international prospects.

Glamorgan coach Toby Radford says his side is 'champing at the bit' to get started, but Birmingham Bears, the name being used by Warwickshire this year, could be without Ian Bell for part of the competition because of England commitments.

Surrey reached the final last year and will rely heavily on the knowhow of South African pair Graeme Smith and Robin Peterson, while Roses rivals Yorkshire and Lancashire also have strong squads, who could push hard for a place at Edgbaston.

BBC Sport website will again broadcast live commentary of every match under a deal with the ECB.

All commentaries will stream online and there will also be coverage on BBC Radio 5 live sports extra.