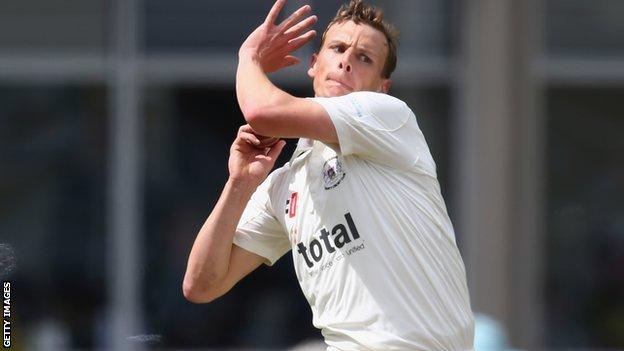 Kent were reduced to 33-6 as Gloucestershire took complete control on the opening day of their County Championship match at Bristol.

Gareth Roderick (59) top-scored for the hosts as they made 252 all out having won the toss, Adam Riley taking 3-51.

Kent then slipped to 2-4, with a wicket falling in each of the first four overs of their reply.

James Fuller (3-23) was the pick of the bowlers as they closed 219 runs behind, 16 wickets having fallen on day one.

Will Gidman also took 2-1 and Matt Taylor 1-3 as Kent suffered a hideous collapse, with Rob Key, Daniel Bell-Drummond and Brendan Nash all falling for ducks and no batsman yet reaching double figures.

"An extraordinary final session has turned the game Gloucestershire's way.

"After batting poorly to get 252, having won the toss on a decent enough pitch, their bowlers produced a sensational performance.

"They were backed up by fine wicketkeeping by Gareth Roderick too, with the catch he took to dismiss Sam Northeast up there among the best, as he flung himself what seemed like miles to his left.

"Amazingly, Gloucestershire recorded their first bowling point after just 16 balls, and Michael Klinger will be thinking whether to enforce the follow on, with Kent still needing to find another 70 runs from somewhere to pass that landmark."