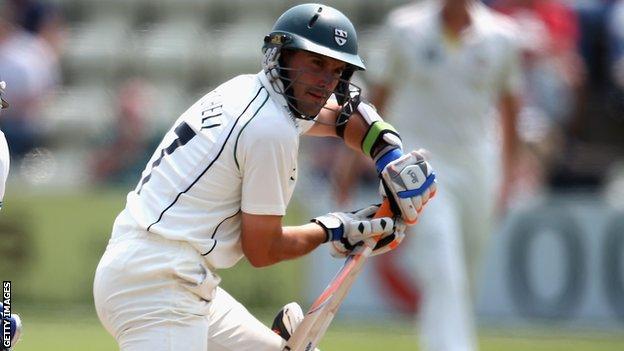 Opener Daryl Mitchell fell three runs short of a century as Worcestershire made 291 before Essex closed on 52-2.

The hosts started well, Matthew Pardoe (45) sharing a 117-run opening stand with Mitchell, who had struck 17 fours when he hit Graham Napier to mid-on.

That left them 156-4, before cameos from Ben Cox (38), Alexei Kervezee and Ross Whiteley secured a solid total.

That left Jaik Mickleburgh on 21, alongside Greg Smith (five not out).

Worcestershire remain unbeaten in County Championship Division Two this season, but their strong start to the campaign has not been built on run-scoring as they have gone beyond 300 just twice in seven innings.

And Essex dragged their way back on day one of this contest by striking regularly, with the hosts' second biggest partnership a 52-run seventh-wicket stand between Cox and Joe Leach.

Mickleburgh and Westley were then easing their way to stumps, to end a strong day for the visitors, but Pakistan off-spinner Ajmal struck to give Worcestershire a strong finish.

"Worcestershire, at 136 for 1, looked to be taking control but they lost their nine remaining wickets in a prolonged afternoon session.

"The crucial blow was Graham Napier's dismissal of Daryl Mitchell, three runs short of a fourth Championship century of the season.

"Worcestershire should have made more and look to be over reliant on their prolific opener, who was again in magnificent form.

"However, two late wickets and considerable turn for Saeed Ajmal keeps them very much in the game."