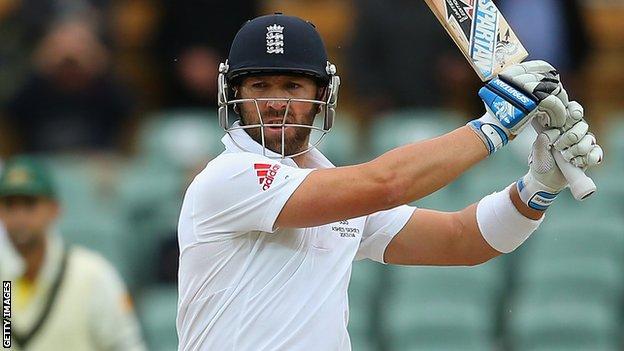 England wicketkeeper Matt Prior hopes to make his return from an Achilles injury in Sussex's County Championship game at Middlesex this month.

The 32-year-old has not played since scoring 125 against the same opponents as Sussex ran out winners in the opening game of the season.

"I'm very close, I'm getting there," Prior told BBC Sussex.

"I'm quite confident I will be playing against Middlesex next Monday (26 May) in the Championship."

He added: "I don't know if that will be as a keeper or just a batter but I'll take either."

Prior has been working on an anti-gravity machine at Brighton & Hove Albion Football Club in his bid to regain his fitness, and he feels that his efforts are finally paying off.

Lean times for Prior

Since scoring an unbeaten 110 to save the third Test against New Zealand at Eden Park, Auckland, in March 2013, Matt Prior has scored only 283 runs in 19 innings for England at an average of 17.68.

"It's been a very frustrating injury in that I've gone three steps forward and then five back," he said.

"But I'm making progress and the last few days have been fantastic from that point of view."

Whether Prior can prove his fitness in time to be considered for England's first Test against Sri Lanka, starting at Lord's on 12 June, remains to be seen.

But, after being dropped for the final two Tests of this winter's Ashes tour, he is hoping to force his way back into new coach Peter Moores' plans and recover from "the worst experience of my cricketing life".

"It was tough for people watching back in England but it was certainly tough being one of the guys who walked out there every day," added Prior.

"You've got to learn from those mistakes and that pain, and one thing it did make us realise is that you can never take for granted winning Test matches, playing in a winning team and winning Test series.

"It's important to enjoy those times because it's really bad when you're losing.

"Now is the time to look forward and really push on with the new squad and an exciting era for English cricket."