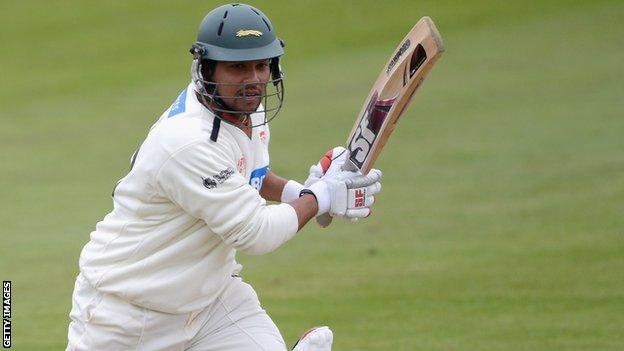 Captain Ramnaresh Sarwan, Angus Robson and Rob Taylor all hit half centuries as Leicestershire made 296-9 against Hampshire on day two at Grace Road.

Resuming on 321-8, the visitors could only add 11 to their overnight score to be bowled out for 332.

After the loss of Greg Smith, Robson (54) shared an 86-run stand with Ned Eckersley (34) to get the hosts going.

Sarwan (60) then took over, hitting nine fours and a six before falling to South Africa seamer Kyle Abbott (4-55).

Earlier, Abbott (40) had also impressed with the bat, hitting four fours and a six before being caught by Smith as seamer Nathan Buck (5-84) completed his second five-wicket haul in as many matches.

"Leicestershire captain Ramnaresh Sarwan was still angry with himself for getting out to the first ball after tea when I spoke to him at the close, an indication of how important he thought it could be for the Foxes to build a first-innings lead.

"While time and again batsmen have got in without going on to make a potentially match-changing score, Sarwan reckons the pitch is still pretty flat and will remain so, suggesting it could be hard for either side to go on and force victory.

"But Division Two eaders Hampshire will probably be the more confident side in that respect, not least because Kyle Abbott and James Tomlinson are bowling so well. Even so, it's still very much all to play for."