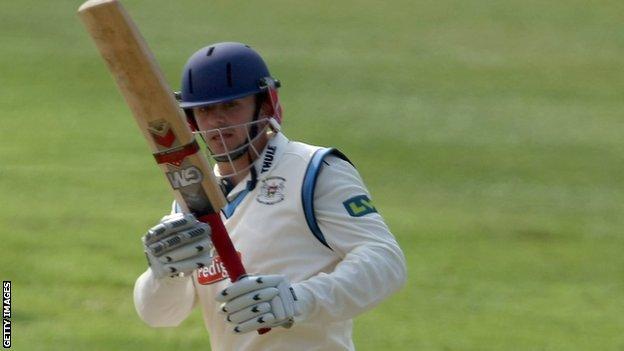 Brothers Will and Alex Gidman helped Gloucestershire stay on top after Kent avoided the follow-on at Bristol.

The hosts reached the close on 213-4 in their second innings, 351 ahead, with Alex Gidman making 85 and New Zealander Hamish Marshall 66 not out.

Kent began the second day in dire straights on 33-6 and, when Adam Riley was caught behind by debutant Gareth Roderick off Will Gidman for a duck from the third ball of the morning, they were staring at the prospect of recording one of their lowest-ever County Championship totals.

However, keeper Billings found a stubborn ally in left-armer Ball, the pair edging Kent to the brink of saving the follow-on.

Ball became Will Gidman's second victim when he was bowled with two runs still needed to make Gloucestershire bat again. But, although they just achieved that, as well as removing both the home side's opening batsmen cheaply, Alex Gidman, whose knock included 10 fours, and Marshall ensured Kent's immediate hopes of hauling themselves back into contention were dashed.

"After decimating the visitors' batting line-up on the first evening, Gloucestershire look to have batted Kent out of it on the second.

"Although the pitch now looks as flat as a weight-watcher's crepe, Alex Gidman and Hamish Marshall played it just right when Kent had a glimmer of a chance at 58-3. They broke the spirits of the Kent bowling attack, and may even be helped by deteriorating weather to make it very awkward for their visitors to survive on the last two days.

"Kent will be buoyed by the maturity of Adam Ball and Sam Billings, who steered them from potential humiliation to avoid the follow-on, and will perhaps remind themselves they chased down 400-plus to win last time they visited the West Country."