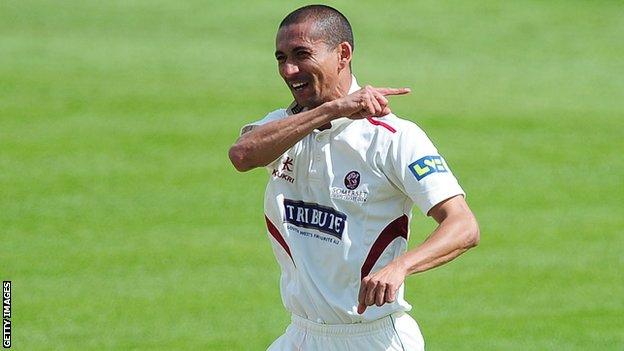 Alfonso Thomas took 5-41 to put Somerset in a dominant position going into day two at Taunton against Durham.

After opting to bat, Durham slipped to a dismal 24-4, including the wickets of Michael Richardson and Phil Mustard in successive balls from Peter Trego.

A fifth-wicket stand of 73 from Scott Borthwick (59) and skipper Paul Collingwood (32) gave the visitors some hope, but they were bowled out for 155.

Alfonso Thomas has now taken at least five wickets in a first-class innings 23 times. His first 'five-for' came for North West against Easterns in South Africa's SuperSport Series in March 2001

Johann Myburgh (28 no) helped the hosts to 51-2 before rain curtailed play.

Somerset captain Marcus Trescothick had earlier fallen to the first ball of the innings, caught at third slip by Gordon Muchall off the bowling of Chris Rushworth, before Nick Compton was caught off Mark Wood for just seven as the adverse conditions interrupted the hosts' reply.

But Somerset will begin the second day buoyed after making light work of Durham's first innings, with South African Thomas the main architect.

The 37-year-old seamer saw off both openers before Trego then trapped Richardson lbw and had Mustard caught by James Hildreth at slip.

Borthwick, who hit 11 fours, and Collingwood led the recovery both went to Thomas, who took five wickets for the second time this season, having done so against Nottinghamshire earlier this month.

Despite 30 from Muchall, on his first appearance in the County Championship since July 2010, the tail, which included first-class debutant Ryan Pringle, crumbled to leave Somerset in command.

"Durham chose to bat but were in trouble from the off as the ball swung around under humid skies, certainly not the batsman's paradise that captain Paul Collingwood had envisaged.

"Things would have been a lot worse had Scott Borthwick and Collingwood not put on 73 for the fifth wicket, but Durham still lost the last six wickets for 66 runs, with Alfonso Thomas impressive.

"There was a glimmer of hope that all is not lost when Marcus Trescothick edged the first ball from Chris Rushworth to third slip - a dismissal planned, said the catcher (Gordon Muchall), on the team bus on the M5 on the way down on Sunday.

"Nick Compton's dismissal for 7 could also be key. He has scored 100s in his last two matches against Durham and has four against them in total."