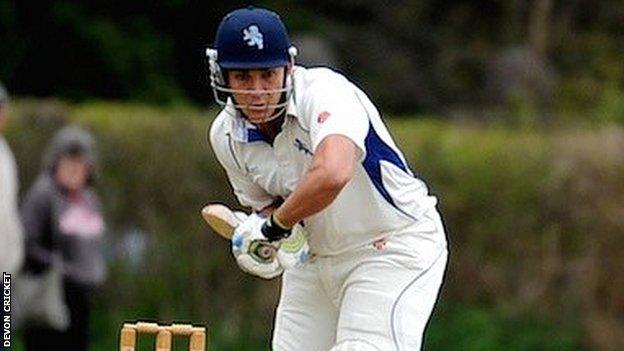 Devon progressed to the knockout stages of the MCCA Trophy for the first time since 2012 after a convincing 50-run win over Wales at Usk.

"It was by far our best all-round performance with bat and ball," Devon boss Keith Donohue told BBC Sport.

"It's very encouraging and pleasing that when we really needed to put in a performance to qualify we stepped up," director of cricket Donohue continued.

"We're brimming full of confidence from one to eleven batting. We have good players all the way down. Outside of James' hundred, who rightly gets the plaudits for that, everyone chipped in where needed and put up quite a formidable total."

Devon lead Group One of the MCCA Trophy, but know that if Wiltshire beat Wales next week they will in all likelihood finish their group in second place.

"We've seen a steady improvement in our one-day game in the past 12 months and those victories recently against Cornwall and Dorset were a great morale boost," Donohue added.

"Winning three on the bounce under pressure is no mean feat. It's great to qualify for the quarter-finals but that's merely step one out of the way and we know we have to do better and we want to go further."